When the Super Soaraway Currant Bun is not serving up its diet of Slebs, flashing the female flesh, laying into foreigners, pretending to be the “People’s Paper” while pushing endless right-wing tosh, telling the world what a wonderful bloke Creepy Uncle Rupe really is, and that it’s all harmless fun, it’s talking about sport, and especially Premier League football. And anyone who is well known who talks about football. 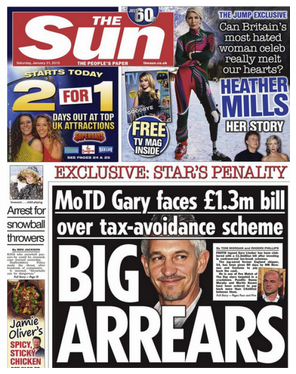 So it is that former footballer and current lead host of the Beeb’s Saturday night Match Of The Day Gary Lineker gets himself on the Sun’s front page, with the latest example this morning. The typically unsubtle headline screams “EXCLUSIVE: STAR’S PENALTY … MoTD Gary faces £1.3m bill over tax-avoidance scheme … BIG ARREARS”. As Sir Sean nearly said, I think we got the point. 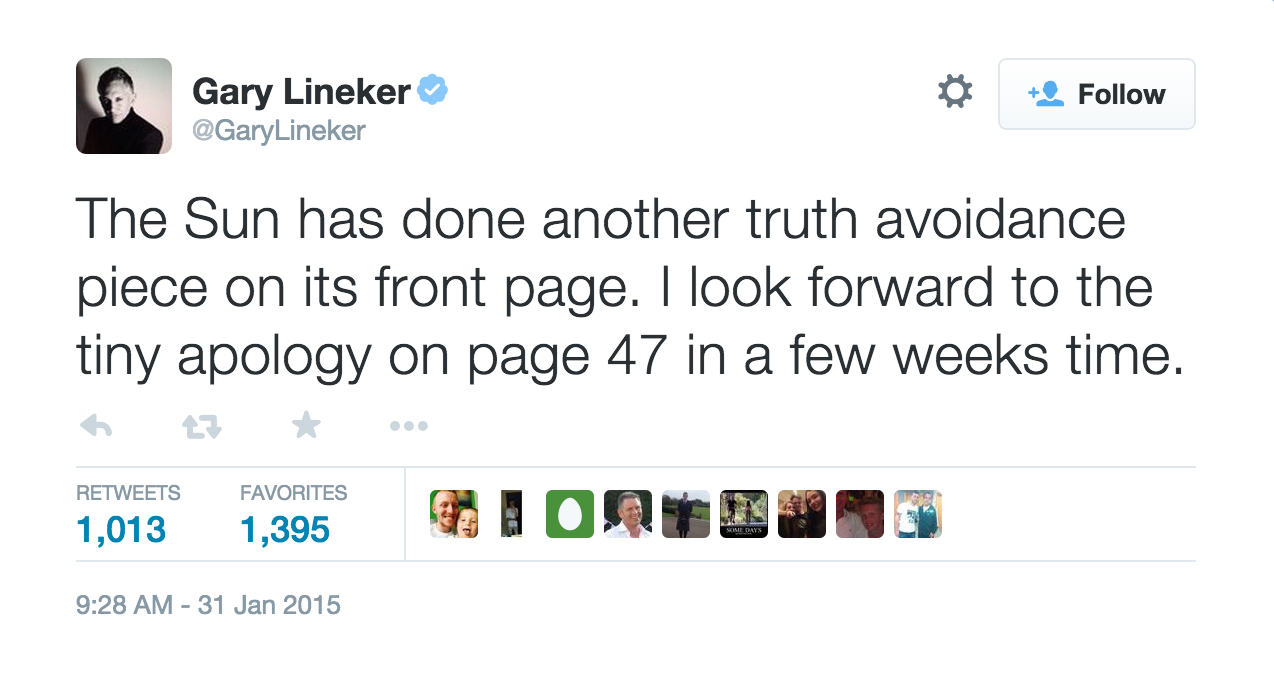 Now, the Sun is behind a paywall, but the Mail has obligingly lifted the article (see how that works, Rupe?) so we can see what they are banging on about. “Gary Lineker is the latest star to be embroiled in tax-avoidance allegations – and has been slapped with a £1.3m bill by the government. The football pundit and television presenter is one of hundreds of stars to have invested in the Ingenius scheme and has been given 90 days to pay HMRC, the Sun reported last night”. Those last five words are the important ones.

Why so? Ah well. One glance at Lineker’s Twitter feed shows that he has taken exception to the article: “The Sun has done another truth avoidance piece on its front page. I look forward to the tiny apology on Page 47 in a few weeks’ time”. So is he saying that Rupe’s downmarket troops have been fibbing?

It seems he does: in response to one Tweeter who asked “Why not sue them?” he replied “I will”. In this he had the sympathy of former Everton team-mate Peter Reid, the man who admitted “I like a bit of a tackle”, who told him “True to form with the Sin mate! No I haven’t spelt it wrong!!” And sure enough, back came Lineker to tell his followers “Right, lawyer’s on the case. Nothing more from me until the apology. Back to the football!” 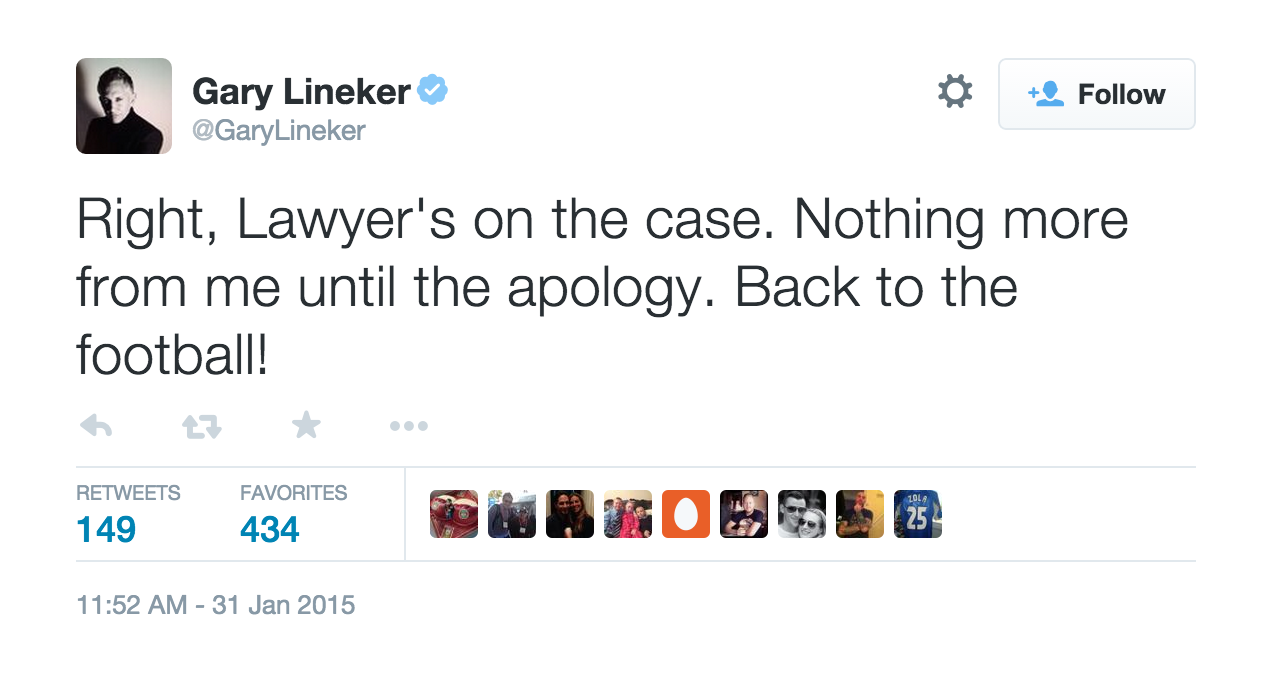 So if the story is false, as Lineker is strongly suggesting, why run it in the first place? Simples. The Sun’s target audience loves football. They love stories about footballers, and in the event that there aren’t any of those, stories about former footballers who are now On Telly will do nicely. The “exclusive” tag, as in “we were the only ones to make this crap up”, is just intended to make a few more mugs waste their hard-earned cash on the paper.

And the fact remains, sadly, that the Sun, like the Daily Mail, works on the basis that any penalty it has to pay for defaming its targets is worth it in extra sales. So the likelihood is that their lawyers will try everything at their disposal to put Lineker off, and then pay up somewhere in the vicinity of the door of the court. And yes, sneak out that tiny apology on Page 47 in a few weeks’ time.

That’s the cream of our free and fearless press for you. Pass the sick bucket.

[UPDATE 1825 hours: the Sun has now pulled the story from its website. The headline is still there, but the link is dead. Lineker has explained why on Twitter. 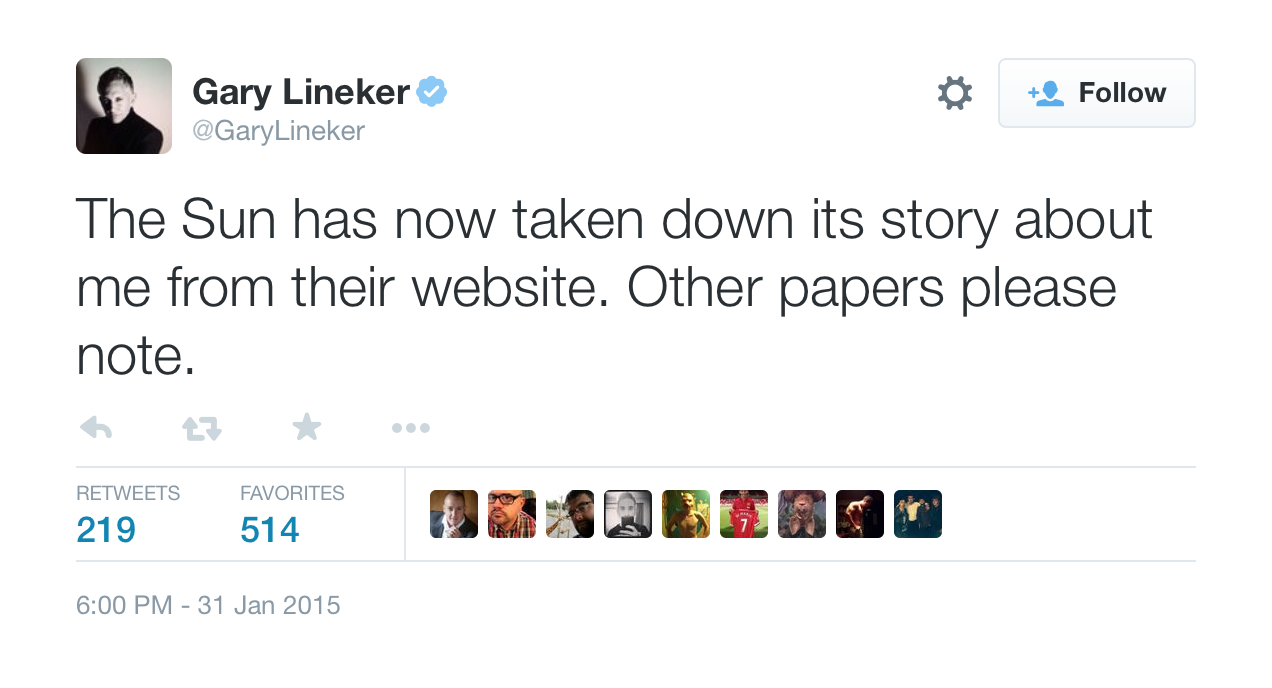 "The Sun has now taken down its story about me from their website. Other papers please note" he told. The Mail still has its version live, but don't expect it to remain there for long.

The problem is that the smear applied by the Sun's print edition is still there, and the damage has been done. It will be interesting to see how long it is before the paper will say sorry and pay rather more than the two dollars]
Posted by Tim Fenton at 13:20

Nothing to do with Rupe's tweets about having a go back at his companies' many detractors and the fact that Gary Lineker has been known to support the aims of Hacked Off for truthful reporting?