Those who look in regularly on Zelo Street will have noticed that the odious flannelled fool Henry Cole, tame gofer to the perpetually thirsty Paul Staines at the Guido Fawkes blog, had recently undergone a change from rotund slob to mere stuffed shirt, shedding a rumoured two stones in weight as a result. At the time, the thought entered as to what caused him to break with Staines on waistline strategy. 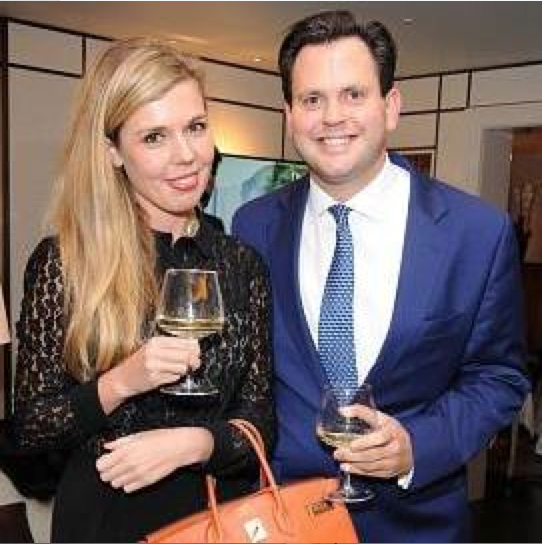 It now transpires that the answer was not what, but who: despite Staines telling Esquire magazine last year that “In fact, I want Harry’s life. He gets to shag all the girls, he’s famous in Westminster, he’s not badly paid and he half does it all for fun anyway”, Master Cole has, so I’m told, recently restricted himself to one partner, which may be good news for her, but potentially awkward for her employers.

So who is the young woman in the photo? She is Carrie Symonds, whose job is “Head of Broadcast” for Conservative Central HQ (CCHQ). This involves routine political propagandising, such as trying to stand up today’s Mail On Sunday horseshit pretending that Mil The Younger and “Auguste” Balls had a crystal ball which foretold the 2008 financial crash, but it nevertheless gives Cole a pal inside CCHQ.

And, while he may think that A Very Good Thing, the remainder of the CCHQ inmates may not be so enamoured of the arrangement, given Cole’s tendency, especially when in Staines’ company, to venture into the nearest Rub-A-Dub and become Elephants’ Trunk and Mozart. The potential for an alcoholically deranged flannelled fool letting slip information that has been obtained from CCHQ would then be all too real.

It gets worse: the Fawkes rabble are hardly going to stand on ceremony and ask CCHQ nicely if they can re-use something Cole has already discovered through his relationship with Ms Symonds if waiting - or, worse, being told to desist - would put them behind the curve on developing political stories. Of course, CCHQ might expect Cole to pass them the odd morsel of news. One only hopes for their sake that they thought that through first.

As Zelo Street regulars know only too well, the flannelled fool is one of the least trustworthy, and most appallingly dishonest, specimens in the Westminster village. No-one with brain engaged would trust the SOB any further than they could reasonably expect to chuck him. When Staines said that “the lying in Westminster is on an industrial scale”, he failed to tell the interviewer that this included his gofers.

So there is also the potential for CCHQ to take Cole’s whoppers on trust and make themselves look worse, if such a thing were easily possible. But it makes a change from Master Cole eagerly chasing after a young man in a chicken suit outside London Bridge station, armed with a camcorder so he can let everyone know of his interesting, er, hobbies. His pals in the press will be suitably relieved.

It still won’t get him past security at a Hacked Off bash, though. Another fine mess.

[UPDATE 20 January 1615 hours: normally, phone and email conversations remain confidential, but where Master Cole is concerned, he long ago forfeited that privilege, on the occasion when he dishonestly, and maliciously, invented a wholly defamatory story claiming that I had been banned by the Huffington Post UK.

So I can now reveal that the flannelled fool took grave exception to this post, which was conveyed via a supremely intemperate phone call yesterday, and backed up with an email which veered from the bullying to confirmation that Cole conforms all too often to Olbermann's Dictum ("the right exists in a perpetual state of victimhood").

Demands were made to know my sources (ho yus). Recourse to instructing lawyers was suggested if I failed to do as he demanded by an imaginary deadline (yawn). Claims regarding copyright were used as a smokescreen (yes, someone from the Fawkes blog got all righteous about copyright). And I was told in no uncertain terms that I had "jeopardised" someone's professional standing.

There was, as Captain Blackadder might have said, only one thing wrong with this idea: it was bollocks. This post contains nothing that anyone at CCHQ, or elsewhere, does not already know. So the question has to be asked as to why Master Cole protested far too loudly about a blog post which says nothing that is particularly contentious about any of those mentioned.

When there is more clarity on that front, I will post further - whether the flannelled fool wants me to or not]
Posted by Tim Fenton at 17:28

Cole & Symonds - the Conference version of the Brooks & Coulson Premier League line up?

Will Cameron ever learn? Let's hope not!

Grant Spiv Shapps will be thrilled

I retweeted this piece with the result that Ms Symonds no longer follows me on Twitter.

If Alex Wickham thinks Zelo Street is like David Icke's blog, surely - since as a result nobody takes it seriously - there isn't a problem?