Rupe’s downmarket troops at the Super Soaraway Currant Bun have today been once again milking their totally untrue story claiming that Mil The Younger was in league with terrorists. Yesterday’s claim that Labour was proposing some kind of coalition with Sinn Féin - clearly untrue, as that party does not take its seats at Westminster because its members refuse to swear allegiance to the crown - has made it into the editorial. 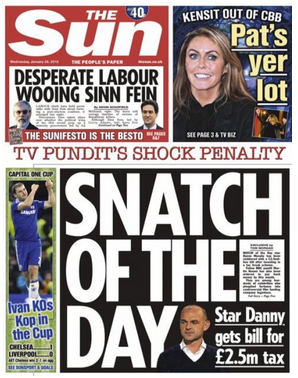 “HAVE Labour gone mad? How do they think even their diehard voters will react to them flirting with Sinn Féin? For years they were the mouthpiece of the murdering IRA. Their MPs still refuse to sit in the Commons. Yet Labour’s front bench, desperate for power at any price, want them onside if they can’t get a majority”. Even the Sun admits they don’t take their seats, but still the dead horse gets flogged. 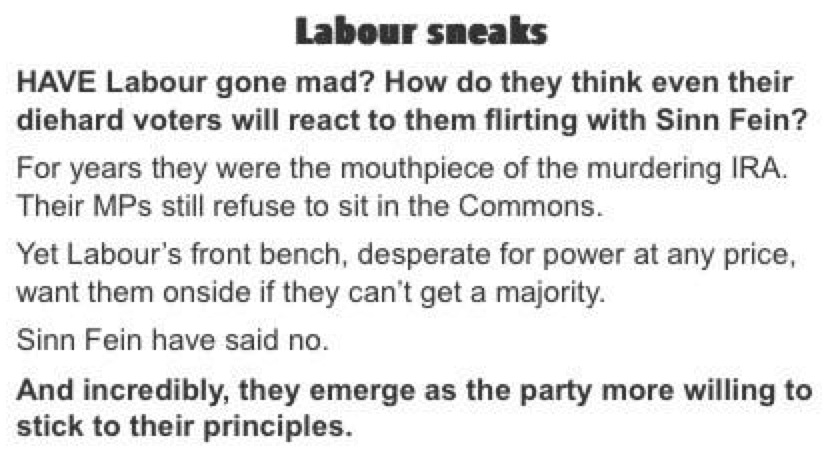 David Jack from the Times defended the “story” on the basis that it had been broken by Gary Gibbon at Channel 4. But what Gibbon said and what the Sun splashed are not the same thing, and in any case, the thought enters that journalists are there to do journalism, and not copy and paste someone else’s work, stopping only to overlay a creative retelling as dictated by Creepy Uncle Rupe. 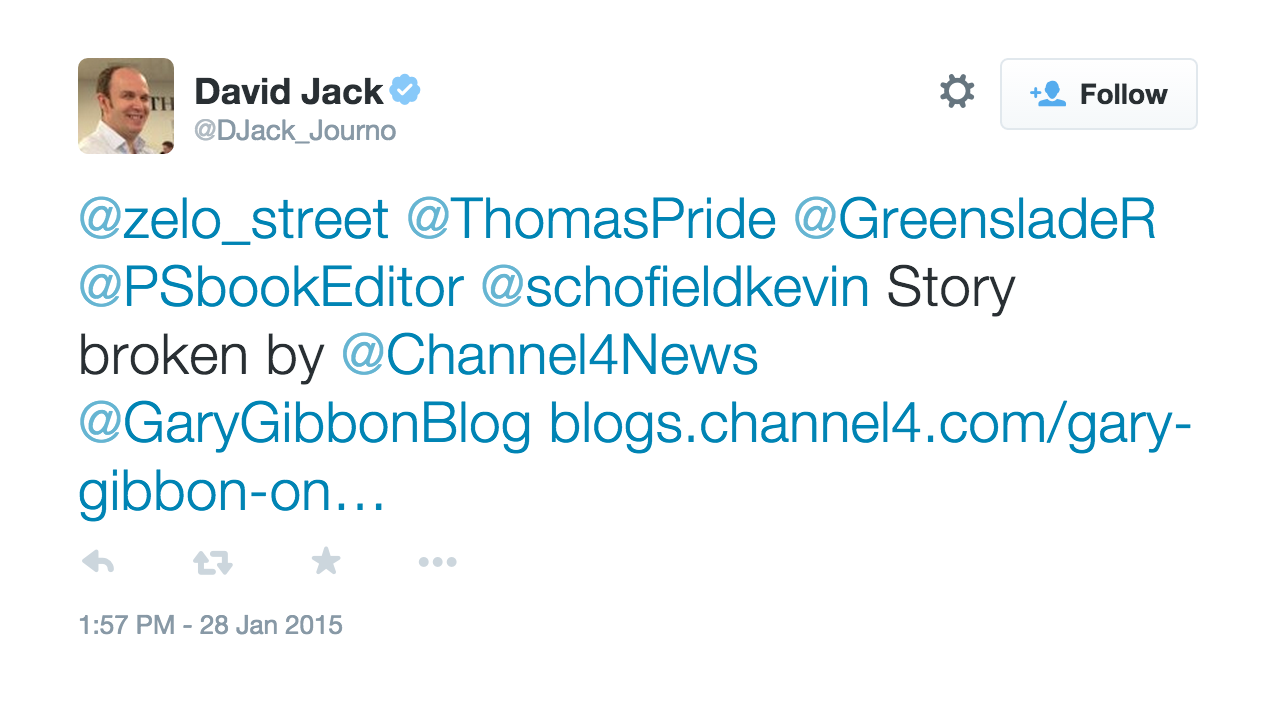 Kevin Schofield, who wrote the original piece, claimed “The story is that talks have taken place, which Labour haven’t denied”. Really? What does Sinn Féin MP Conor Murphy say about that? “We have met with all of the major British political parties in the line of our work as MPs over many years … None of these parties have ever asked us over the course of these meetings to support them on the other side of an election”.

Another Sinn Féin spokesman quoted by the Guardian said “The story which appeared in The Sun is another example of lazy, fantasy journalism which is befitting of this particular newspaper”. And Labour? Ivan Lewis, their Northern Ireland spokesman, called the Sun story “untrue nonsense”. That’s as close to a denial as makes no difference.

He went on “Sinn Féin have said themselves that this story is ‘pure fiction’, and that absolutely no discussions have taken place. Labour’s record as an honest broker in Northern Ireland speaks for itself”. So what has been happening? The Guardian explains “The reports appear to have been prompted by a meeting between Sinn Féin deputy first minister of Northern Ireland Martin McGuinness and Ed Miliband in Belfast last week. But the discussions … were linked to peace process issues only, Labour has insisted”.

So there have been talks, but not about what the Sun claims. And both Labour and Sinn Féin have denied the paper’s claims. One wonders what part of that Messrs Jack and Schofield do not understand. The thought also occurs that it would not have been unduly taxing for the latter to make the checks I did before typing out this blogpost. It’s almost as if the Murdoch poodles didn’t want to bother with the facts.

But that’s what happens when you shamelessly shill for the Tories.

[UPDATE 30 January 1520 hours: it's been pointed out to me that one political party has tried to amend the oath of allegiance to enable Sinn Féin MPs to take their seats should they decide to abandon their abstentionist stance. Sadly for the Sun, that party is not Labour.

As the Telegraph reported back in 2006, "The Oath of Allegiance to the Queen sworn by MPs should be reviewed to encourage Sinn Fein to take up its five seats in the House of Commons, David Lidington, the Conservative Northern Ireland spokesman, said yesterday ... He suggested the five absent Sinn Fein MPs, including Gerry Adams and Martin McGuinness, who represent the political wing of the Provisional IRA, could take an 'alternative' oath with references to the monarch removed".

This was also reported at ConHome. All of that, of course, puts the Murdoch poodles in another of those very difficult positions. Not only have they been shamelessly lying about what is happening right now, but in order to make their story stick, they have had to ignore the backstory.

A photoshopped image of Young Dave and Gerry Adams - something that is rather more grounded in reality, but what you will not see in the Sun]
Posted by Tim Fenton at 17:35