On Thursday’s edition of the Daily Politics, the relationship between the UK and Saudi Arabia was questioned by my good friend Sunny Hundal, who asserted that, given the latter country’s lamentable record on human rights, and its medieval attitude towards women, the Kingdom of Saud should be regarded as a pariah state (you can see his short film HERE). Our acceptance of such regimes, due to arms sales and oil, was all too clear. Over in that reassuringly upmarket part of Manhattan, Louise Mensch was not interested in the thoughts of someone else, but when news came yesterday that Saudi King Abdullah had passed at the age of 90, and that flags around Westminster would be flown at half mast in respect, she saw an opportunity to advance the cause of Herself Personally Now, and launched into a stream of the most unfortunate language. 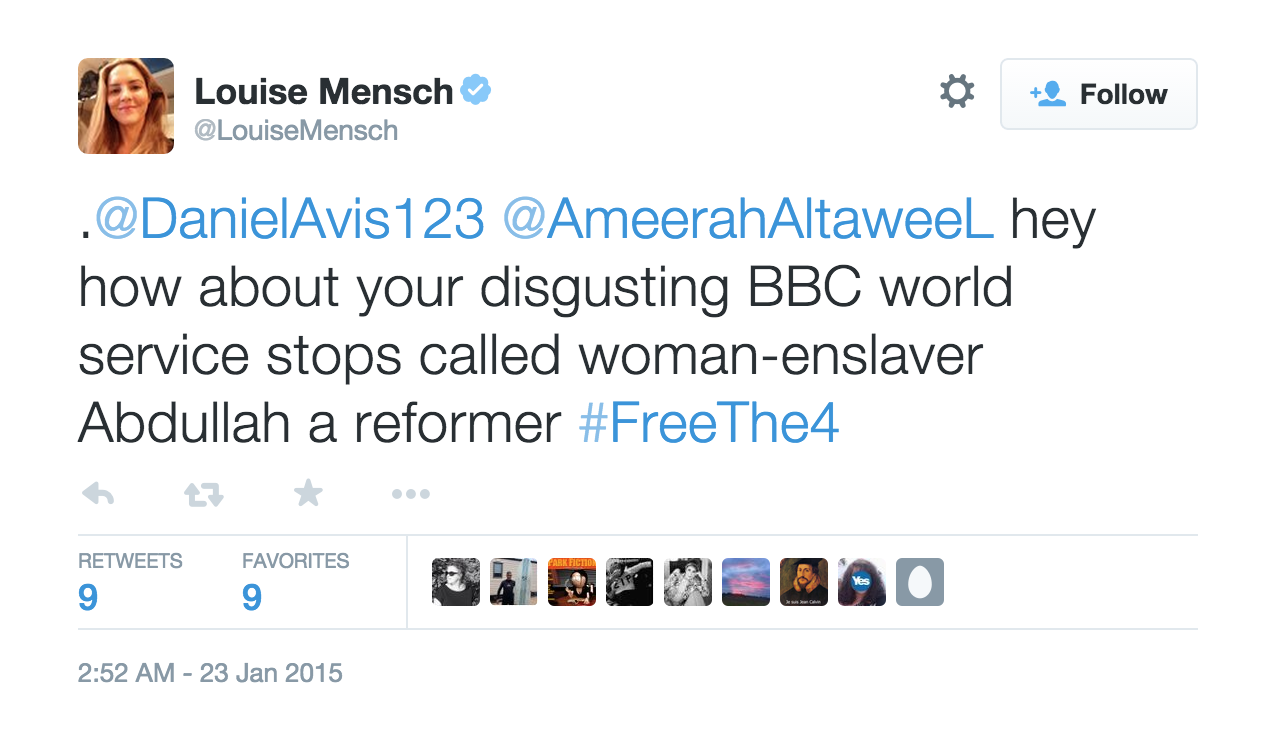 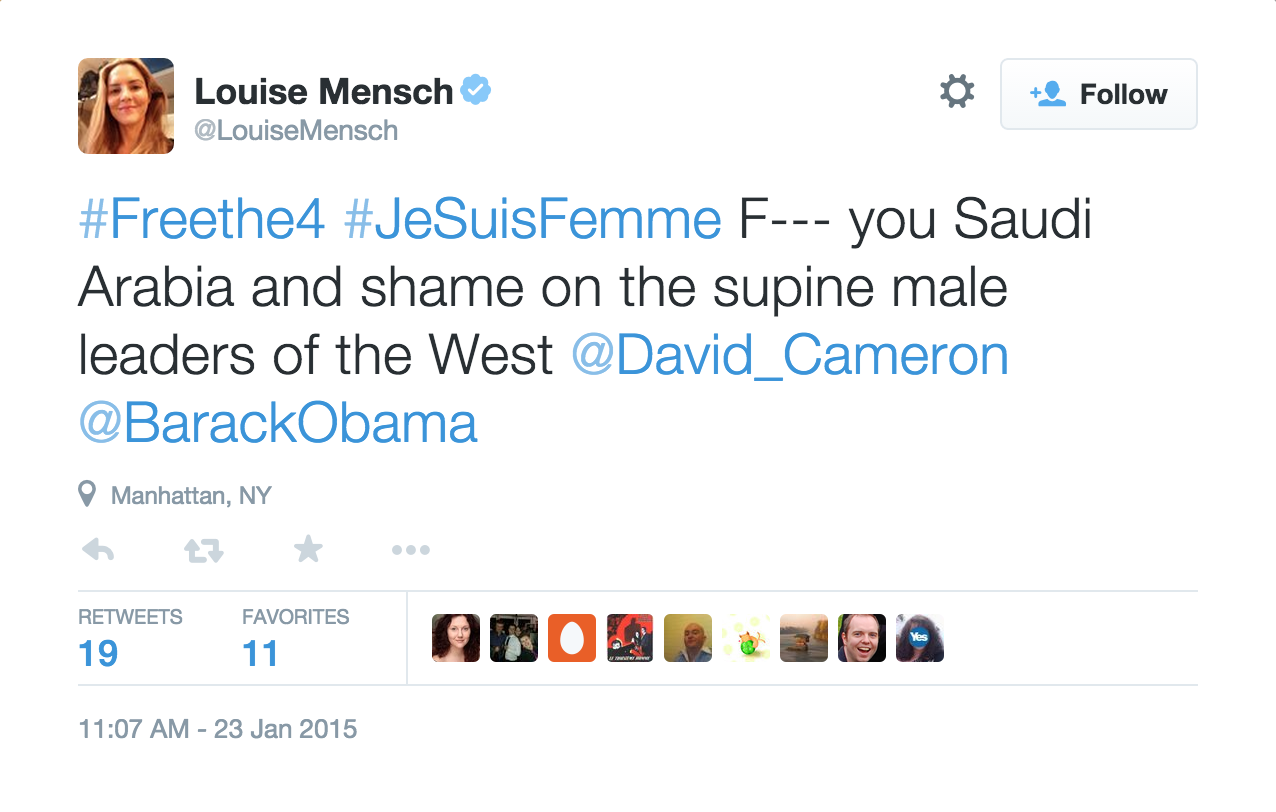 As a good Murdoch pundit, her first target was the hated Beeb: “hey how about your disgusting BBC World Service stops called [sic] woman-enslaver Abdullah a reformer” she ranted. Then it was the turn of her party leader and the Prez: “F*** you Saudi Arabia and shame on the supine male leaders of the West [David Cameron] [Barack Obama]”. As Sir Sean nearly said, I think we got the point. 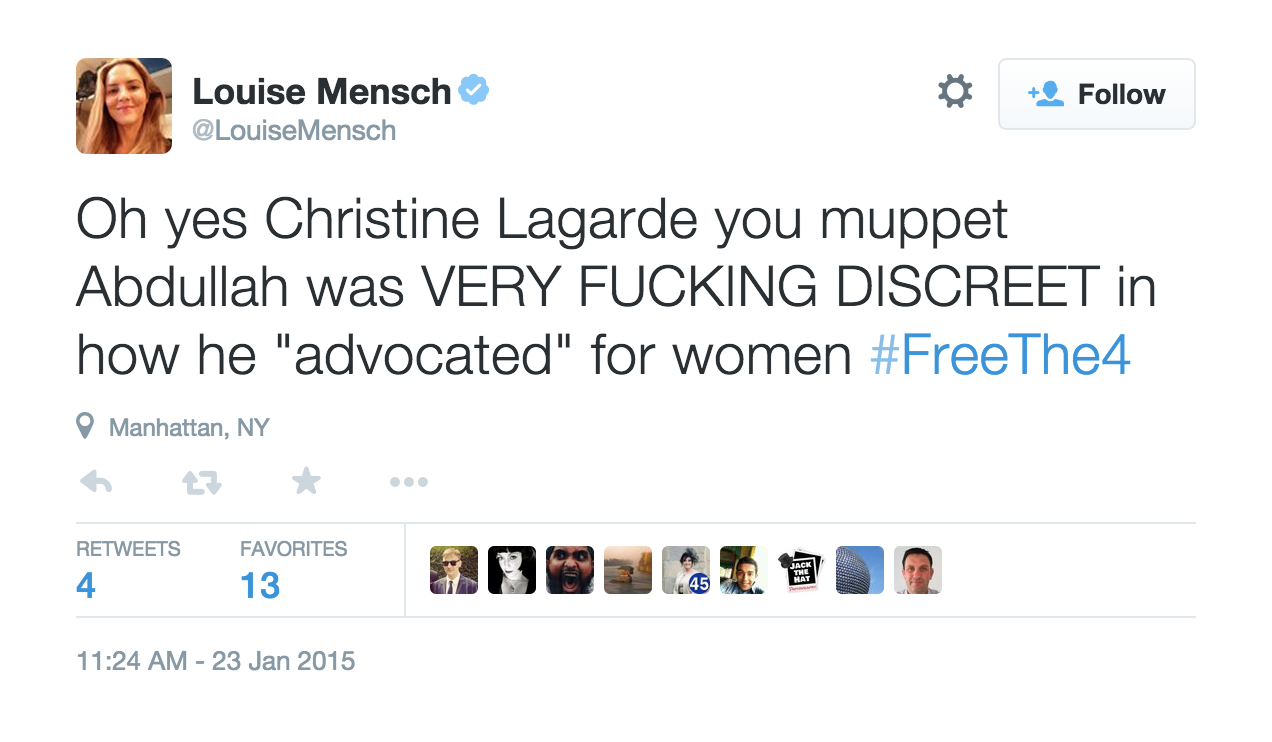 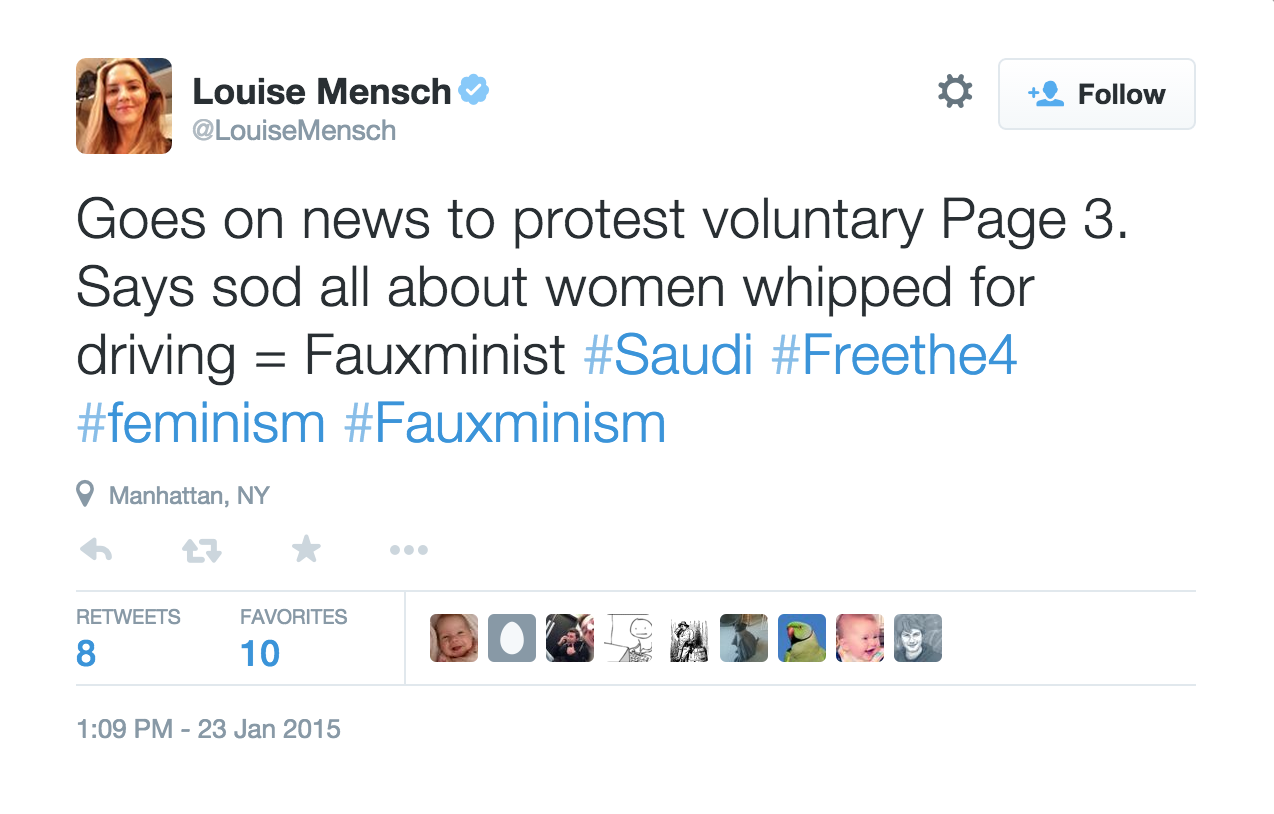 Who would be next as the rant-o-meter was cranked up? The head of the IMF, no less: “Oh yes Christine Lagarde you muppet Abdullah was VERY F***ING DISCREET in how he ‘advocated’ for women”. How about another Murdoch plug? You betcha, says Sarah: “Goes on news to protest voluntary Page 3. Says sod all about women whipped for driving = Fauxminist”. Who was that? Who knows? And who cares? Ms Mensch doesn’t. 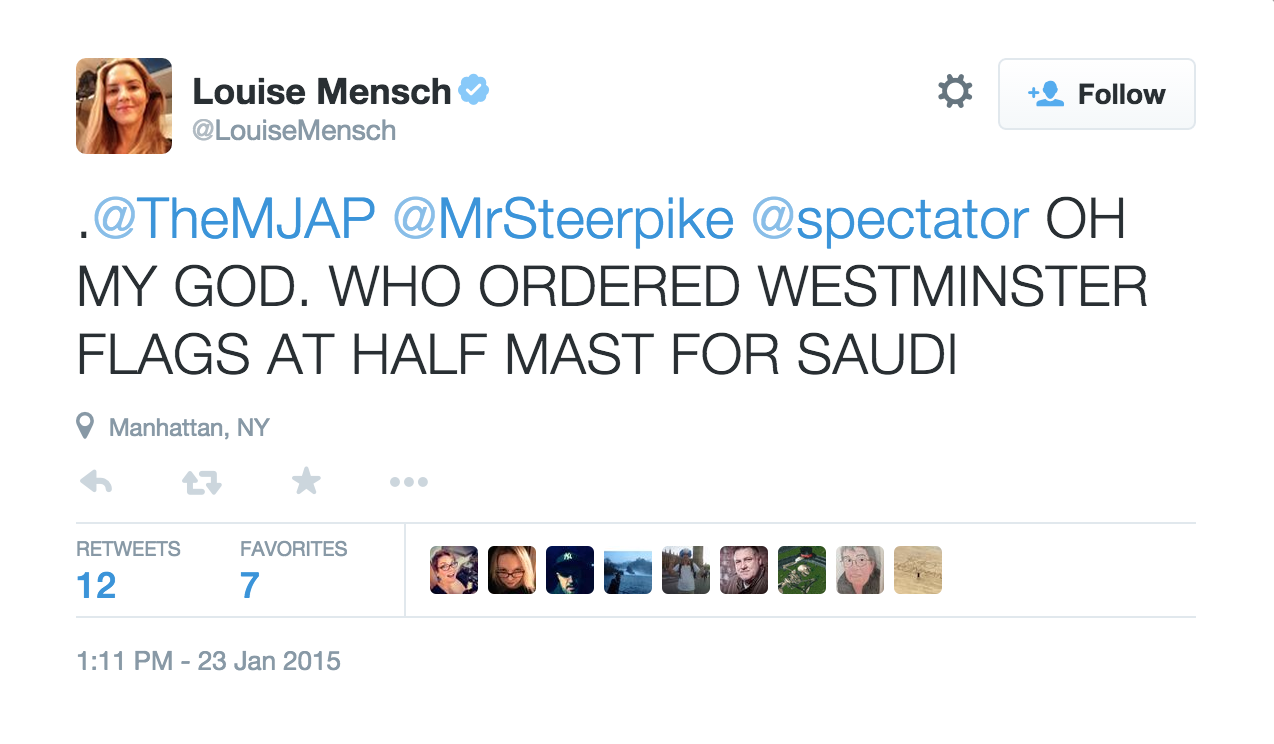 And then came the Westminster flag realisation: “OH MY GOD, WHO ORDERED WESTMINSTER FLAGS AT HALF MAST FOR SAUDI”. By now, the Caps Lock was well and truly on as she bawled “JESUS CHRIST, IS ONE UK MP GOING TO SAY ONE WORD ABOUT THIS OUTRAGE”. Clearly a fan of Dan Hodges’ missing question marks. 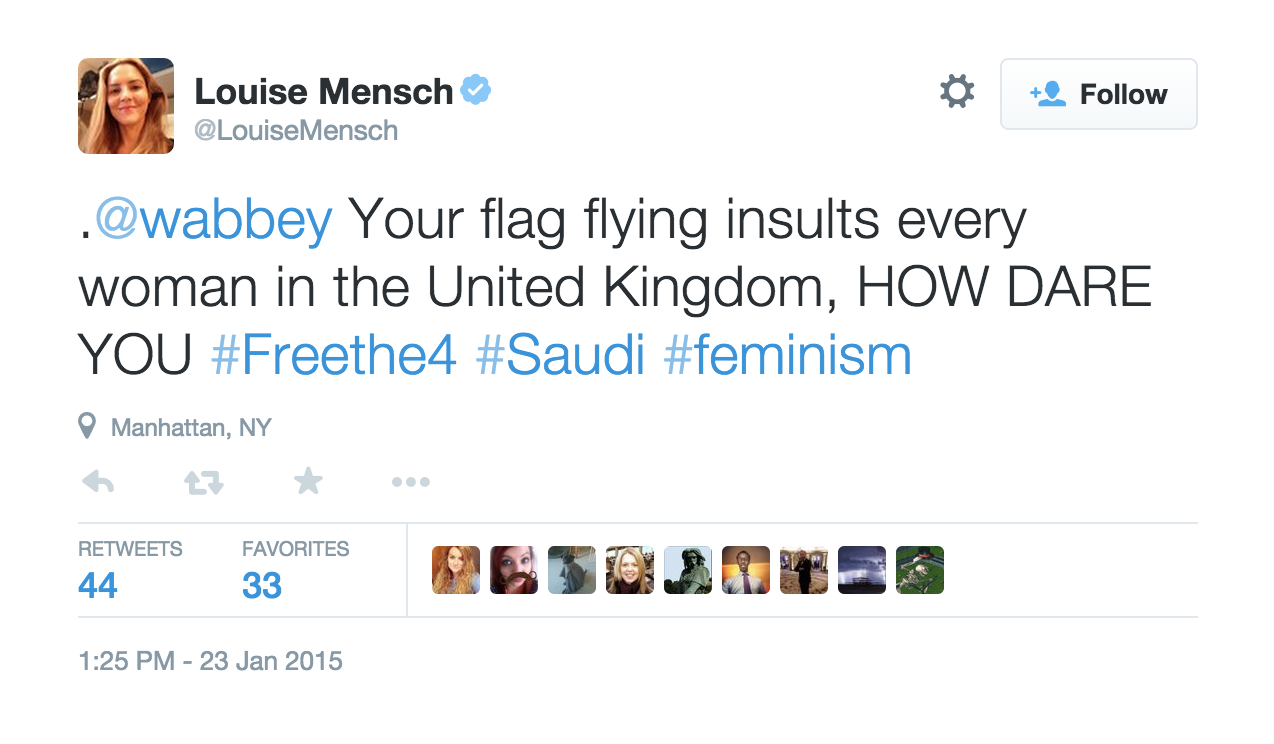 With no answer to that one, or to most of her other outbursts, Ms Mensch turned her ire on to Westminster Abbey: “Your flag flying insults every woman in the United Kingdom. HOW DARE YOU”. But there was no reply here too, and so, with the red mist descending, she went after the UK in Saudi Arabia Twitter account. “F*** YOU” she screamed. 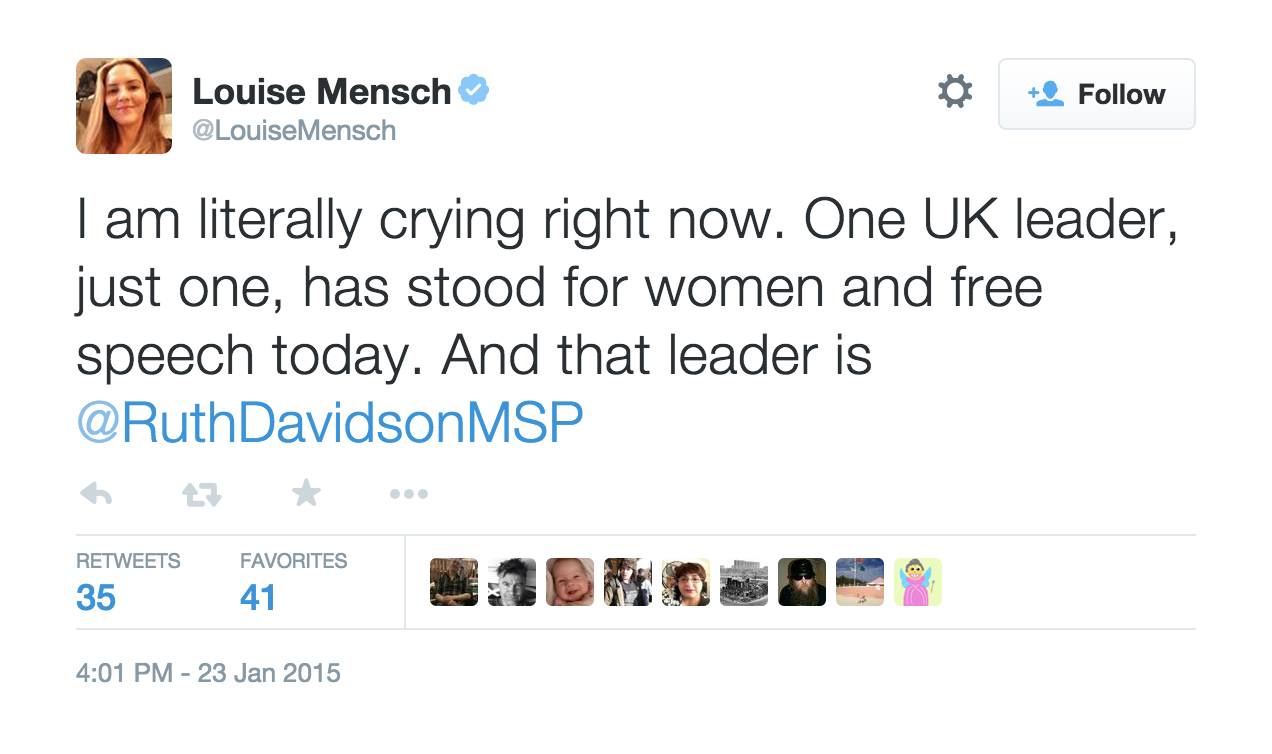 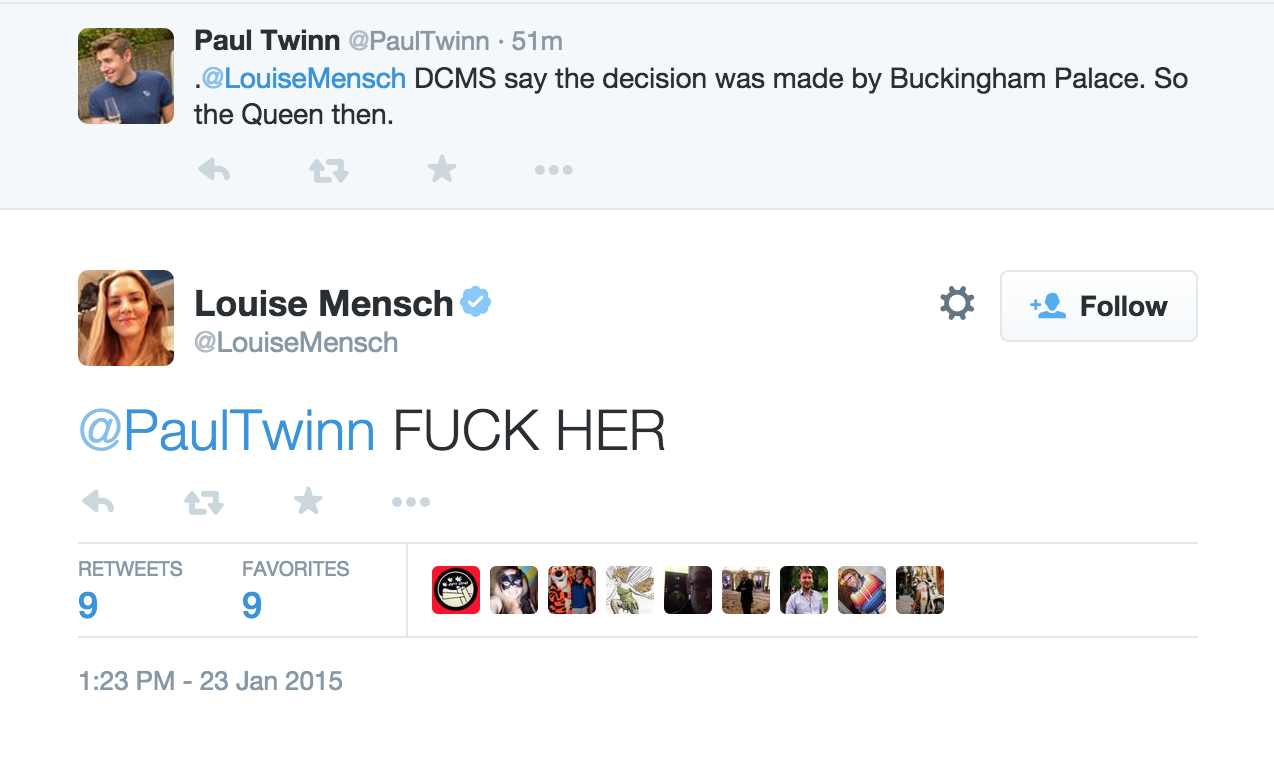 Ultimately, it was all too much for poor Ms Mensch: “I am literally crying right now. One UK leader, just one, has stood for women and free speech today. And that leader is [Ruth Davidson]”. As opposed to those crying with laughter at Louise losing it, to the extent that, on learning the Queen may have made the decision to fly flags on Royal palaces at half mast, howled “F*** HER” in response.

So when Louise Mensch gets her US citizenship, perhaps she won’t mind having her UK passport revoked, as she has no respect for the Royal family. After all, we have standards to maintain. Even though she was allowed to become an MP.
Posted by Tim Fenton at 10:59

(to be sung to your own tune)

Apart from her rather intemperate language, I find myself rather agreeing with her this one and only time. Dont worry it wont happen again Im sure.

And please spare us the ******* asterisks. They are somewhat over cautious since you show her unexpurgated tweets anyway. You aren't trying to claim some moral high-ground are you?

Unfortunately she's right on this one occasion , language and all.

This is about the only occasion I can think of where I'm in complete agreement with the woman. Even a stopped clock is right twice a day and all that. The gushing tributes to the leader of one of the most unpleasant regimes on the planet is sickening. Blair's tribute in particular, initially reads like it was written for the Onion before the nauseous realisation dawns that he means every word.

Those commenters thinking that this post is somehow siding with the Saudi regime, or failing to see that Ms Mensch's primary purpose was self-promotion, should read the first paragraph.

I agree with Louise, the Saudi rulers are Scum. well said her, and shame on the Royal family who I'm a big supporter of

She didn't see fit to say much about the Saudi regime back when she was an MP, even though this special, oily relationship had been a thing for quite some years before that.

Also, she has to use this platform to make a dig at the people protesting against Page Three, as they clearly aren't as good at feminism as her. Personally, I think it's a bit "faux" to call yourself a feminist and then spend half the time slagging off other women for doing it wrong. But clearly, if I were as good at feminism as her, I'd have inserted my tongue into the arseholes of a succession of incredibly powerful men, as she has done.

I should like to know the last time that the flags over our Parliament building and over Westminster Abbey were lowered to half mast for the head of a foreign state. Probably for Kennedy in 1963. So long ago that Churchill was still in Parliament.

But it happened automatically for the King of Saudi Arabia this week, and the people responsible were surprised that anyone was surprised. Yes, our political elite really is as close as that to one of the most evil regimes on earth.

Meanwhile, the announcers on CNN, allegedly the flagship of American liberalism, have been dressed in mourning black. I want to see Obama bow to King Salman next week. He bowed to King Abdullah in 2009.

I am pleased to see that that Charlie Hebdo march had such an affect on David Cameron and François Hollande, as they arrive to heap praise on King Abdullah and to kiss the hand of King Salman. As mentioned, Barack Obama will turn up there next week.

I should be surprised if they did not come away with blood on their lips, so much of it drips from the hands of any King of Saudi Arabia.

One day, one day soon, we shall see these people as we now see the British, French and American politicians who sucked up to Pinochet and to Ceaușescu, to Pol Pot and to apartheid South Africa, to Ian Smith and to Robert Mugabe, to Stalin and to Hitler.