In the wake of the Charlie Hebdo mass murders, the killing of Police officers, the hostage taking and killing of four bystanders who happened to be shopping at a Kosher supermarket near the Porte de Vincennes, there have been rallies across France. Over four million are estimated to have turned out to show their defiance. Following those rallies, we now need to learn lessons. 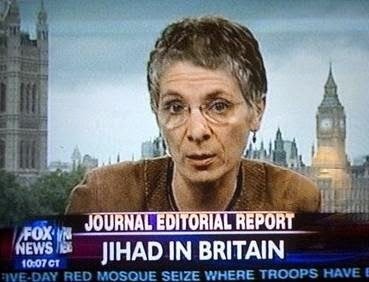 And one lesson that some are finding hard to learn is that the last thing we need right now is a climate of scaremongering and rabble-rousing. So it should surprise no-one that this is exactly what is being peddled by Melanie “not just Barking but halfway to Upminster” Phillips, not only in her latest broadcast for the Voice Of Israel, but also as a columnist for Rupe’s allegedly upmarket troops at the Times. 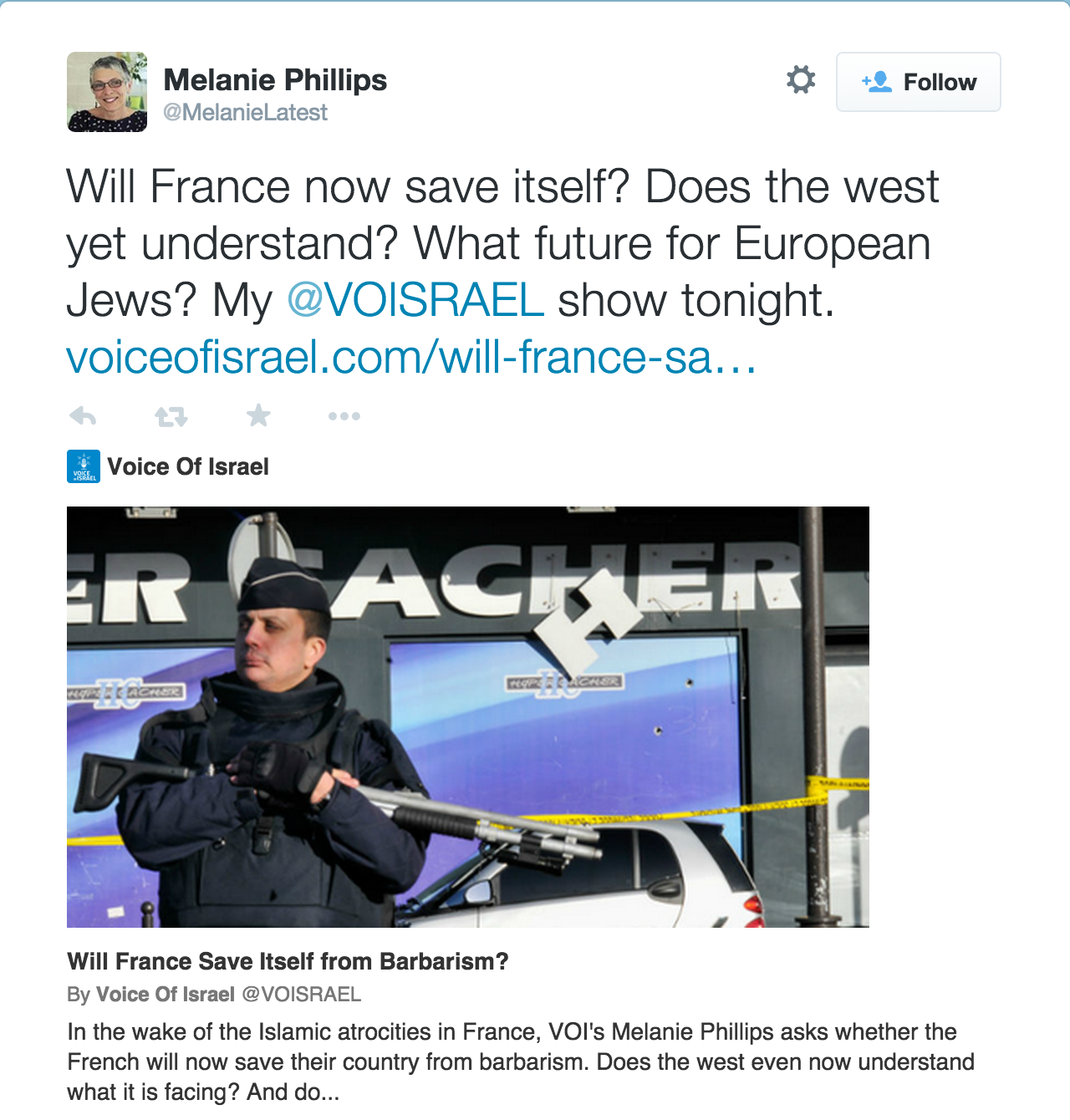 The thought that the attacks in France were the work of three individuals is not allowed to enter, as Mel asks “Will France save itself from barbarism?” Listeners were asked “Does the west even now understand what it is facing?” More pertinent might have been to ask if Mel knows what on earth she is rabbiting on about.

But she was, by now, on to her roster of suitably like-minded talking heads: “Nidra Poller tells me on [Voice Of Israel] today’s rally [is] heartening but France can’t combat rocket launchers [and] Kalashnikovs”. Yeah, right. Considering that all of the attackers ended up dead, one might conclude that France could combat whatever they were armed with rather well - once the response was mobilised.

Then it’s on to the allegedly “disturbing” British reaction, and to no surprise at all, her chosen talking head is none other than Doug Murray The K, who, it is claimed - no laughing at the back, now - is an “Islamism analyst”: “Douglas Murray tells me on [Voice Of Israel] despite French slaughter by Islamists Brits fret over threat to Muslims”. Baloney. What Murray means is that he can’t get his bigotry accepted everywhere.

But by now Mel was in full flow: “On [Voice Of Israel] I argue Muslim anti-Semitism [is the] core of Jihad. West fails to realise own fate bound up with Jews & Israel”. Yes Mel, that’s why the gunmen kicked off by murdering ten journalists and two Police officers, one of whom was a Muslim. There’s anti-Semitism for you.

And, to finish, the pièce de résistance is a characteristically ranting plug for Mel’s Times column. “Unless [the] west acknowledges Islamist holy war and its key driver, jihadi threat won’t be defused”. Which means what? “Jews, not cartoonists, are Islam’s real enemy”. Very good Mel - see above. You keep on frothing and ranting and ultimately, whatever the merits of the argument, the target audience will stop listening.

What we need now is calm thought and cool heads. Mad Mel brings neither of those.
Posted by Tim Fenton at 12:55

Why does Phillips continue to write for or appear on, platforms largely owned by a Saudi Arabian (the home of Wahhabism) based Prince? See another posting of mine asking why he continues to invest in them.

Is it possible for someone to ask her this question directly, AndyC?

Money is probably a large part of it, but if charitably assume that neither party is motivated solely by a love of filthy lucre, then there are some interesting potential reasons.

Mad Mel is very much of the opinion that any criticism of Israel's foreign and domestic policies, particularly re: Gaza, is tantamount to the vilest anti-semitism. Israel is largely able to get away with everything it does because of virtually unconditional support from the U.S. in particular from Republican quarters, and Fox News is basically the mouthpiece of the Republican Party. Fox News is therefore a natural home for the hysterical opinions of Mad Mel, and one where her ravings carry some traction with its viewers.

Saudi Arabia meanwhile has a vested interested in making sure its allies in the West don't scrutinise it's rather slip-shod approach to human rights too closely. At the moment they are counted as our allies, and claim to stand firm against the likes of IS and others and so can buy all sorts of fun weapons from us in exchange for oil. However, if the situation in the Middle East were to change in such away that there was no big scary Muslim threat (Iran, Iraq, Syria, IS...) for the West to fret about, they might start to ask awkward questions of the Saudi royalty...