Philip Hammond, who has risen quietly and purposefully to become Foreign Secretary, is sometimes compared to “Shagger” Major in his unobtrusive, slightly grey, but highly effective presence within the Tory Party. And, like Major, he is well capable of saying something blatantly untrue in order to progress his agenda, as he has done in trying to further demonise the EU ahead of this year’s General Election. 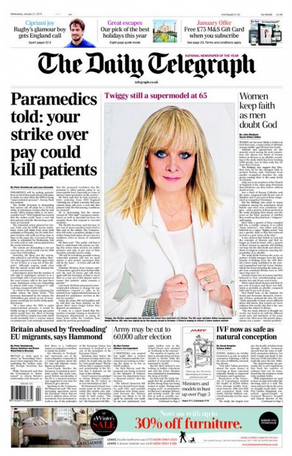 However, and here we encounter a significantly sized however, the Tel’s timing on this one is less than ideal: the deeply subversive Guardian has revealed that, when it comes to the better-off EU member states - especially Germany - there are rather more British citizens claiming benefits there than Germans claiming here. Ireland has a similarly wide disparity. Even France has more Brits claiming there than its own citizens claiming here.

It gets worse: even though there are more Spanish nationals claiming in the UK than Brits in Spain, the ageing demographic means our nationals will be making disproportionally high demands on the Spanish health services in future years. The only conclusion is that it is not always easy to conclude who is freeloading off whom. 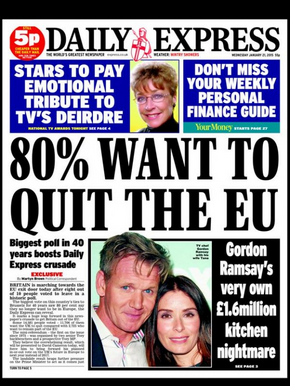 But the Tel’s line in misinformation is far more subtle than that being peddled by the Express, aka the Daily UKIP, which has splashed the headline “80% WANT TO QUIT THE EU” this morning, knowing that the assertion is untrue. We know this because the Express’ article supporting that headline tells “Now 80% demand vote to quit EU”, and the figures are from a poll in which respondents did not “demand” anything.

It gets worse: those in favour of having a referendum on EU membership soon numbered only 49% of respondents, with the rest of the 80% coming from 33% who favoured a vote “in the next few years”. When the level of desperation involves printing statements that are not only untrue, but demonstrably so, the impression is inevitably given that someone is losing the argument. And that someone is the press.

Let’s discuss the EU, and let’s discuss it openly and honestly - for a change. Hint.
Posted by Tim Fenton at 10:31

just remind me (and them), what proportion of the UK population buys the Daily Express?