First, London’s occasional Mayor Alexander Boris de Pfeffel Johnson turned his back on the anti-HS2 lobby that had invested so much trust in his backing them (unwise, eh?), and then, to no surprise at all, the Evening Standard, aka London Daily Bozza, began to run artists’ impressions a-plenty as the area around Old Oak Common, site of an HS2 and Crossrail hub, was talked up as The Next Big Thing. 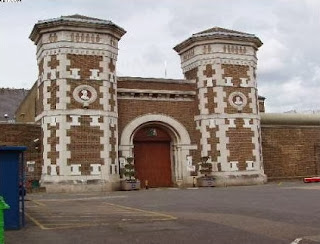 It's not Manhattan, it's for Very Naughty Boys

The problem for the Standard, and anyone else gushing about all the big new shiny glass stumps that are supposedly going to materialise near the HS2 interchange in the near future, is getting the numbers, the credit, and the hyperbolic comparisons in sync. First we were told that Old Oak Common was set to be the next Canary Wharf by Jonathan Prynn in the Standard last June.

“A vision for a ‘Canary Wharf of the railways’ regenerating one of west London’s most deprived neighbourhoods is being unveiled this week. At a cost of at least £10 billion, more than 100 acres of windswept railway sidings and semi-derelict wasteland at Old Oak Common, just north of Wormwood Scrubs, would be the setting for the capital’s next large scale ‘phoenix-like’ revival”. Gosh.

Yes, it was going to be, as Benny Hill said in The Italian Job, “big ... y’know ... BIG”. How big? “Twice the size of the redevelopment of the King’s Cross railway lands”. And it “would create 90,000 jobs and result in 19,000 homes being built”. And the HS2 station would be “vast”. As Sir Sean nearly said, I think we got the point. But then the cost and comparison changed. And in came Boris.

This month, Standard transport editor Matthew Beard proclaimed that not only was Bozza personally overseeing events, but also that “By 2025 a ‘mini-Manhattan’ of skyscrapers and apartments will shoot up around the station in north-west London”, but the cost had shrunk to just £6 billion. Other numbers had also changed: it would “spur the creation of 80,000 homes and 20,000 jobs”.

“Council leader Nicholas Botterill says the regeneration potential will boost this deprived part of the borough where around half of working age adults are unemployed”. Funny, only yesterday Bozza was crediting Margaret Thatcher with the Canary Wharf development. Now it seems it isn’t down to the PM of the day – not when there’s a little dusting of the sparkly stuff on offer.


We won’t get Manhattan. But we will get hot air. No change there, then.
Posted by Tim Fenton at 13:11

Are you concealing a false Goon Show about your person?