“You know what some of this is about because everyone does. This is the phone hacking trial. But it's not just a phone hacking trial”. Thus began Anthony Edis QC, outlining the case for the prosecution, as an array of formerly faithful Murdoch retainers sat in the dock at the Old Bailey. Zelo Street has not been passing comment, as there is no wish to run foul of contempt laws. 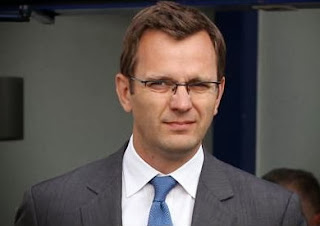 But summaries of proceedings are quite in order, and so I’ll be looking in on the case from time to time, and pointing out what appears interesting, like the opening of the trial having to be put back six weeks because Rebekah Brooks had to obtain the services of another lawyer. Why her first choice lawyer could not continue will no doubt be revealed in the fullness of time.

What is also interesting, although many will no doubt have heard recent speculation on the matter, is that Brooks had been having an affair with Andy Coulson for some years when both were working for either the Sun or the Screws. Edis introduced this information as he asserted that it demonstrated the closeness of the two: “what one knew, the other would know” (this is not the view of the defence, naturally).

And the Jury is being asked to shut out any other supposed information about the trial – not just the cover of Private Eye issue 1352 – while concentrating on three categories of alleged offences, namely phone hacking, misconduct in a public office (public servants selling privileged information), and perverting the course of justice – in this case, concealment to block Police enquiries.

All those standing trial have denied the charges. However, and I consider this to be a significant however, not only has Glenn Mulcaire pleaded guilty to a charge of conspiring to hack phones, but so have three former Murdoch news editors, Greg Miskiw, James Weatherup, and Zelo Street favourite Neville “stylish masturbator” Thurlbeck. They were all senior figures in the organisation.

It has also been revealed to the court that Coulson had sent an email concerning the pursuit of Calum Best that contained the words “Do his phone”. Nevertheless, Timothy Langdale QC, acting for Coulson, has asserted that his client had nothing to do with phone hacking. But this activity appeared to be routine when he was in the editor’s chair, although not necessarily as a primary source for stories.

So you will see that defence counsel stress that stories are not the result of hacking, although it is also contended that hacking was used to stand them up – a second source, if you will, where no other was available. And that, apart from the long list of instances and witnesses, is where we are right now. It will be interesting to see if the defendants hold their defensive line as the trial progresses.
Posted by Tim Fenton at 17:25

You must be wilfully blind to ignore the plausible deniability case!