Most stations on the London Underground network have a ticket window open for most of the day. But the take-up of Oyster, and ready availability of machines to replenish those cards, and provide one-off tickets and Travelcards, means that less people need to use them. Even so, today’s announcement of total closure by 2015 has surprised many – because Bozza promised them otherwise. 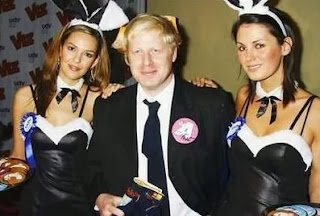 Being Mayor may involve more onerous duties than this, Bozza

But, before looking at the Mayor’s latest about turn, can the system be run with no ticket office staff? Well, the Barcelona Metro was down to a handful of them when I visited in late 2006, and four years later even these had closed. Madrid has a human presence at the Airport, but most large city centre stations have dispensed with such luxuries. There are ticket machines. You can buy season tickets online.

In Italian cities like Rome, Milan and Naples, ticket purchase for one-off journeys and day passes is farmed out to news kiosks. Many stations on the Lisbon Metro have opening hours that don’t start until after the morning peak kicks off – there are machines to issue one-off tickets and charge up your smartcard. You’ll find a similar situation in Germany and the Netherlands.

Paris, on the other hand, maintains a ticket office at most stations, but for how long is not known. So when Bozza decided to run for Mayor back in 2007, he could have seen which way the wind was blowing in mainland Europe before challenging Ken Livingstone over ticket office closures. Livingstone had revealed that the 38 least used offices were selling 249 tickets a day or less.

In fact, the office at Fairlop (Central Line Hainault loop, in case you need to look) was selling a mere fifteen a day. Livingstone was convinced of the case to close offices where demand was low and redeploy staff to other customer facing duties, or to drive trains. The problem for Bozza was that, in running for Mayor, he had committed himself to keeping them all open (not everyone was convinced).

Now push has come to shove and he’s had to ditch the policy. The pill is being sweetened by also announcing that some Tube lines (Jubilee, Victoria, Central from Ealing Broadway to Hainault via Newbury Park, and Northern from Morden to both Edgware and High Barnet via Charing Cross) will have 24-hour operation at weekends. But it’s still a U-Turn.

So there will be a requirement for more drivers. But whether 750 ticket office staff can be absorbed without compulsory redundancy is doubtful. That is the legacy of Bozza chasing the popular vote without his team engaging brain and thinking it through. Yes, the system can probably manage without ticket offices, but he promised in 2007, and again four years later.

That’s what happens when you get a part-time Mayor. You were warned.
Posted by Tim Fenton at 17:06

I have to wonder whether the "all-night tube" plan has been properly thought through. TfL was saying until very recently that engineering hours on these lines was the bare minimum, but now apparently TfL can do without engineering hours on two nights a week (including the useful 6 hours on Sunday morning). Will it really happen? Is it a ploy to distract attention from another abandoned pledge by Boris?