Last year, before he began the pretence of ignoring me completely – because, by that time, he had a chap to do that sort of thing for him – the odious flannelled fool Henry Cole, tame gofer to the perpetually thirsty Paul Staines at the Guido Fawkes blog, decided to pass adverse comment on my shopping habits (as slow a news day as usual for the Fawkes rabble, it seems). 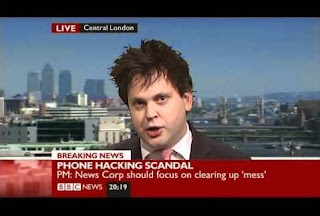 I don't need to go shopping, cos I'm on telly!

“Tim Fenton shops at Aldi. Enough said” proclaimed the buffoon, to the adulation only of the humourless Robin Shepherd at The Commentator, who has, as a result, attracted The Curse Of Zelo and seen his group blog become a laughing stock, with the icing on the cake his recent paranoid online meltdown which he failed to delete quickly enough. Both these august sages were dead wrong. 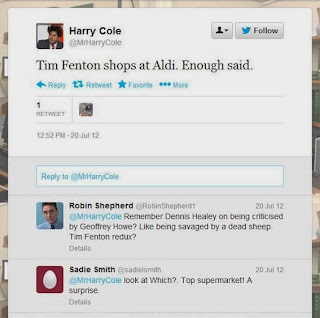 We can conclude thus as not just the deeply subversive Guardian, but also the Mail and Telegraph, have taken notice of Aldi as a shopping destination: in the words of one of the chain’s executives, “Discount stores used to be places where people needed to shop ... Now people actually want to shop here”. Perhaps Master Cole also has a chap to do his shopping. If not, he needs to wise up sharpish.

The Mail, a paper aimed at the very heart of Middle England, has long had Aldi on its consumer radar, recently announcing “The high street copycats: Yes it's cheap - but the real secret of Aldi's success is the ruthless way it apes the look of top brands... and often the quality is even better”. Dead right. Only those totally in hock to brand loyalty, or lingering snobbery, are going to be put off a trial visit.

If Master Cole wants to spray his money up the wall, more fool him: the local Aldi offers, in the run-up to Christmas, products that would be right up his street. Grand Cru Margaux (“drinking well now”), good red and white Burgundy (that’s Pinot Noir and Chardonnay, natch), and a Pimm’s-style punch that out-does Pimm’s are all on offer, in addition to award-winning puds and pies.

Harry Wallop in the Tel notes that Aldi has just opened a store in what he calls “chi-chi Knutsford”, the heart of the Chancellor’s Tatton constituency. He also notes the significant increase in the AB percentage of the store’s clientele (now better than 1 in 6 shoppers). Aldi is posting record profits, while at the same time taking a million customers a year from the “Big Four” supermarkets.

And this previously very private company – it is ultimately still family owned by the Albrechts, and so is not listed on any stock exchange – has now gone on a charm offensive, inviting the Tel to meet the managers and see how new products are put through their paces before being allowed out into the store. Master Cole can turn his nose up all he likes, but many like him are waking up and smelling the coffee.

After all, not everyone has money to spray up the wall. Another fine mess.
Posted by Tim Fenton at 13:20

One warning about shopping in Aldi - they use a parking "management" company called Parking Eye who last year issued over seven thousand court papers to motorists who did not pay their so-called "Parking Charge Notices of up to £70. And the "crimes" committed by these shoppers? Staying just a few minutes over the allocated time or returning to the same store within a couple of hours. Luckily both County Court judges and POPLA(the independent appeals service)are ruling that the amounts of money PE are demanding do not actually reflect the actual losses suffered by the landowner or PE. As this comes under civil law,that's all that can be claimed. Unfortunately too many motorists are frightened when they receive the official looking paperwork from PE and just pay u, thus generating a profit for PE last year of over £4m. Just take a look at Aldi's FaceBook page to see they amount of ill-will Parking Eye are generating for Aldi.

Interesting. The only times I've visited Aldi by car have been to the store on Grand Junction Retail Park in Crewe, and it's not their car park.

And just to add to that, Parking Eye have just been taken-over by Capita at a reported cost of £55m.

I will try their white Burgundy and report back.

But it is Staines that has the soft spot for the Margaux.

Seriously, you used to be better than this.

Do they do a punchy little Pomerol?

How do I know, Hen? Go there and find out.

Oh, and you were never any good anyway, but then, that's our little secret.

Meanwhile you can give your boss the good news.

The pinot noir is going down a treat tonight. £5 a bottle.

That's not Pinot Noir as in Red Burgundy, though. That was around £18 a bottle when I last looked.