Mail In BBC Yeah But No But Shock

Yeah but no but ... it must be Vicky Pollard, right? Wrong. It’s the obedient hackery of the legendarily foul mouthed Paul Dacre at the Daily Mail. The fearful followers of the Vagina Monologue have been – not for the first time – caught facing both ways on one of their trustiest sources of clickbait, the hated BBC. The Corporation is A Very Bad Thing ... but then, suddenly, it isn’t. 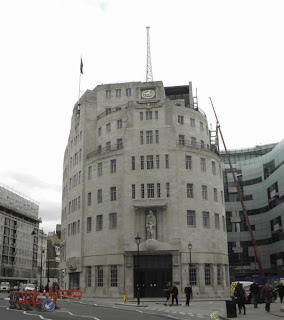 At first, it’s all bad: “BBC Question Time in shambles after panelists travelling to Salford stranded on train following trackside fire”. Yeah, see, should have done it from London instead of that really expensive new place somewhere near Manchester! [This misses the inconvenient fact that Question Time would have been equally in schtuck anywhere else outside the capital, and probably in London too]

And there’s the licence fee to kick: “And now for yet another public service announcement: New BBC chief Tony Hall wants corporation to use its channels more aggressively to argue for £145.50 licence fee”. See, they use YOUR MONEY to advertise themselves to you! Rubbish isn’t it?!? And guess what? Even their own stars say they’re rubbish!

Who did they have in mind? “Alan Sugar in blast at BBC jobsworths who stop money being spent on better programmes”. Yeah, he says they’re rubbish too! And he’s not alone: “I hate how the BBC wastes its money and talent: An audience with a VERY feisty Jennifer Saunders”. Funny how they stop being lefty luvvies when they say something that suits the Mail.

And, on top of all that, there’s an assault from talentless and unfunny churnalist Richard Littlejohn: “And over on BBC... another £1bn wasted”. Yeah, they spent all that money on a place in Salford and flogged off Television Centre on the cheap (no citation). They all have to travel from Euston every day (no citation) says accurate and highly respected Daily Mail pundit (no citation).

As Sir Sean nearly said, I think we got the point. The BBC is A Very Bad Thing. But then, along comes Jan Moir, who is between hatchet jobs right now. “Your Xmas telly starts here! From a dashing new Mr Darcy to the return of Open All Hours, JAN MOIR, snuggles up on the sofa for a cracking Christmas on the box”. Er, hang on, both those programmes are on ... the BBC.

You betcha, says Sarah: Ms Moir lists eleven must-watch shows, plus a big plug on the side for The Great British Bake Off. That makes twelve, of which nine – or 75%, if you prefer – are on the Beeb. ITV, Channel 4 and Sky have to make do with one each. So the BBC is actually A Very Good Thing. Who’d have thought it? So maybe the Mail was channelling Vicky Pollard all along.

Or maybe Dacre’s hacks are a bunch of steaming hypocrites. No change there, then.
Posted by Tim Fenton at 13:30

In a similar vein the good old Mail had a go at the BBC for using licence fee money to send Mr and Mrs Jonathan Agnew on a three day rail trip in Oz whilst he covers the Ashes. Mr Agnew put them straight on this via Twitter saying he paid for the three day trip and after being away for 5 weeks he was probably due a break.

He then helpfully informed the Mail that he WAS receiving payment which would cover some of the costs. He was writing a report on the trip for the travel section of The Mail on Sunday.