Boris Is Still Full Of Crap

As if to prove once and for all that he is in politics mainly for the advancement of Himself Personally Now, London’s occasional Mayor Alexander Boris de Pfeffel Johnson fetched up to deliver the annual Margaret Thatcher lecture to the Centre for Policy Studies – another of those Astroturf lobby groups out there on the right – and apparently laid claim to Mrs T’s mantle. As if. 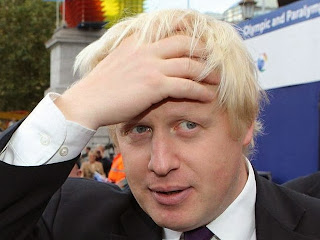 “What Would Maggie Do Today?” was Bozza’s subject, and straight away he was off in crowd pleasing mode: “The amazing thing about the funeral of Baroness Thatcher was the size of the crowds, and the next amazing thing was that they were so relatively well behaved. The BBC had done its best to foment an uprising”. Anyone’s bullshit detector not sounding? Get it fixed sharpish.

Then he segues effortlessly into a lame appeal to authority: “They weren’t around in the 1970s. I was, and I remember what it was like and how this country was seen. Our food was boiled and our teeth were awful and our cars wouldn’t work and our politicians were so hopeless that they couldn’t even keep the lights on because the coal miners were constantly out on strike”. Yeah, right.

The only thing that stopped me getting to work in the 70s was the weather. And the power cuts came during Sailor Heath’s premiership – a cabinet that included one Margaret Thatcher. He then lets it slip: “in January 1975 ... I was already a pretty irritating 9 year old”. Yeah, nine year olds have the most authoritative view of contemporary life, don’t they? Do they heck.

And then there are the whoppers: “In 1983 she took on Neil Kinnock and gave Labour an epic drubbing”. That would be news to Kinnock, who did not lead the Labour Party at the time (it was Michael Foot). But back to Mrs T, who “had introduced millions of people to the satisfaction of owning their own home”. And Big Bang, both of which served to rack up debt (he doesn’t remember that).

Then he did it: Bozza mocked 16% of the population. “Whatever you may think of the value of IQ tests, it is surely relevant to a conversation about equality that as many as 16 per cent of our species have an IQ below 85, while about 2 per cent have an IQ above 130. The harder you shake the pack, the easier it will be for some cornflakes to get to the top”. Cornflakes don’t rise to the top. It’s called gravity.

But he knows what Maggie would have done – apart from mocking those who don’t do well in an IQ test – and to no surprise this includes the now dead and buried Boris Island airport, which would be named for Mrs T, just to show what a crawler he is. And building monuments to greed, along with giving thanks to the well off for deigning to pay their taxes. Perhaps we should tug our forelocks as well.

Bozza wants to lead his party. If they have any sense he won’t. A simple choice.

[UPDATE 29 November 0950 hours: while the usual suspects have been showering praise over Bozza for supposedly saying what all right-thinking people are supposed to have been thinking anyway, not everyone has read his speech with enthusiasm.

Corporal Clegg has passed severely adverse comment, and Suzanne Moore, no friend of all those clever people who talk loudly in restaurants, has called Johnson's philosophy "not just elitist [but] sinister". And it has had to be pointed out that IQ tests can be rigged through cramming. 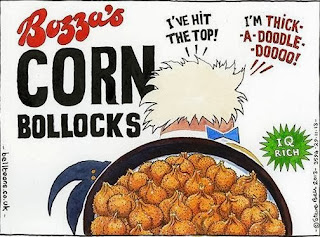 And the IQ test just happens to be what all those fee-paying schools use to do the selection that produces folks like Bozza. Not that London's occasional Mayor is going to let that one slip]
Posted by Tim Fenton at 12:36

Boris doesn't remember all the great things Margaret dis, which would get her thrown out of today's party.

I first heard Margaret Thatcher give a speech while I was a student in 1971. She had been my MP for as long as I remembered and, while I knew many local conservatives, Margaret had always been too busy to attend local meetings. Unlike the styles of Tony Benn, Michael Foot or Martin Luther King, Margaret's speech style was not demagogic, but it was always clear, prepared, precise, logical and intellectual - it was obvious that she was a scientist.

1971: Speech to Finchley Conservatives in favour of Europe. Two senior Fincley conservatives, Leslie Snelling and Frank Gibson, tell me that this speech converts them into pro-Europeans.

1978: Authorises Airey Neave to tell Irish Republicans that Britain will never use torture, especially on prisoners. Neave, himself tortured by the Nazis, uses this to persuade Republican MPs Gerry Fitt and Frank Maguire not to support Labour in the no-confidence motion which Thatcher wins by one vote. Almost immediately, Neave is murdered in the Houses of Parliament.

1984: Signs joint agreement with China to surrender sovereign territory of Hong Kong and three million British citizens to the People's Republic in 1997.

1985: Signs Channel Tunnel agreement. The Thatcher version of investment in infrastructure (like HS2, but successful and privately financed)

1988: Speech on Climate Change to Royal Society. Promises that UK will lead research into climate with a dedicated centre.

1990: Opens Hadley Centre for Climate Prediction and Research (now the Hadley Centre for Climate Change)
- "Many of us have been worried for some time now about the accumulating evidence of damage to the global environment and the consequences for life on Earth and for future generations. I spoke about this to the Royal Society in 1988 and to the United Nations General Assembly in November last year. Today, [...] the publication of the Report of the Inter-Governmental Panel on Climate Change, [...] confirms that greenhouse gases are increasing substantially as a result of Man's activities; that this will warm the Earth's surface, with serious consequences for us all; and that these consequences are capable of prediction."

1990: Joins ERM, with intention to form part of the Euro when it is launched. Lawson makes the same mistake as Churchill (with the Gold Standard - British Gold Standard Act 1925) and fixes the exchange rate for the pound far too highly (GBP 1 = EUR 1.77 rather than GBP 1 = EUR 1.20 as it is now.)

Bozza wants to lead his party. If they have any sense he won’t. A simple choice.

A simple choice perhaps, but also a fairly big if.

We can all hope that this is his Mitt Romney or Keith Joseph moment when the boss class's stunning arrogance is nakedly revealed.