Winter Is Cold No Shock Horror

As the days shorten in the approach to the Winter solstice, the temperature falls gradually: we light up the fire, set the central heating, and realise that this is a perfectly normal feature of the climate in this part of the world. But for the dwindling band of hacks labouring in the service of Richard “Dirty” Desmond at the Express, this does not get in the way of a good scare story. 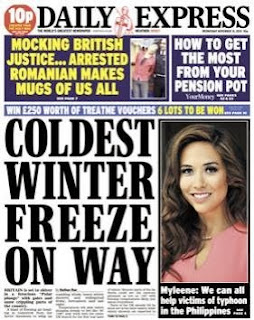 And so it came to pass, as Nathan Rao, no stranger to talking up routine weather events into crises of the greatest magnitude, entered the realm of Ron Hopeful to bring his readers “Coldest Winter Freeze On Way” yesterday. Yes, the coldest Winter in living memory was just around the corner, which, given the age profile of Express readers, means at least as bad as 1962-3, if not 1946-7.

Now, given that those two winters – and yes folks, I remember 1962-3, thanks – were well into the Absolute Stinker category, anything worse would have to be seriously bad. So what’s Nathan going to pony up as evidence? Well, he’s relying heavily on quotes from Jonathan Powell of Vantage Weather Services. That’s the same Jonathan Powell formerly of Positive Weather Solutions (PWS).

And we all know what happened to PWS: it was exposed as a sham by George Monbiot at the deeply subversive Guardian, and closed soon afterwards. But you clearly can’t keep a good man down, and so Powell has returned with the same kind of fluid in a differently labelled bottle. Moreover, he is not the only dubious source quoted by the Express – there is also Exacta Weather.

Who they? Well, Monbiot featured them too, noting that “I asked whether it is true that the company consists of one undergraduate student and a computer”. Sadly, Exacta were less forthcoming when difficult questions were asked of them. So that’s two highly questionable sources that Rao is using to stand up his story. But fortunately he also quotes one reliable one, the Met Office.

“The Met Office said there is a chance temperatures will sink below average over the next 30 days with snow on the way” says Rao. Go on then, tell us what they actually say: “Conditions are not expected to be as mild as recent weeks, instead, temperatures are thought more likely to be just below average than above ... Snow is not unusual during late November and early December”.

In other words, the Met Office is not, repeat not, standing up Rao’s ludicrous claim. Trying to forecast the weather for a country that sits between maritime and continental conditions for months in advance would require supernatural powers, extreme good fortune, or bluff. I can say with absolute certainty that Nathan Rao does not possess the first. Make your own minds up about the other two.

Meanwhile, that’s more cheap copy, so it’s another Benchmark Of Excellence!
Posted by Tim Fenton at 13:10

Have we checked whether they were reading the 1963 forecast by mistake? You know how they live in the past. I've just read the Met Office 30 day forecast and the word snow appears once, coupled with the word showers and in relation to just one day.