And so the gloom that had been hanging over the right-leaning part of the Fourth Estate was lifted, and the sun appeared on the horizon. Yes, the seemingly unassailable Labour poll lead was now in danger: there was a scandal that could be easily, if tenuously, connected to the party, and boy, were the hacks and pundits going to milk it for all it was worth. 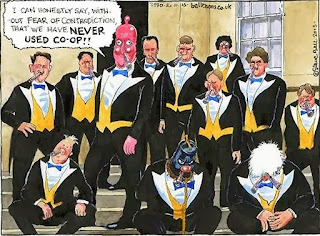 For some reason, the Co-Op bank, back in 2010, appointed one Paul Flowers as its chairman, despite his having little experience of banking, although the role, not being an executive one, should not require its holder to possess the financial nous of a CEO. Flowers has been caught apparently attempting to buy Class A drugs, and is now an ex-chairman of the Co-Op bank.

And, so what? Well, the Co-Op bank has had to be rescued, after a number of loans that came with its takeover of the Britannia Building Society went bad. And it has loaned money to the Labour Party. Put these together with Flowers’ alleged friendship with Charlie and you have the basis for the Tories to go into full baying yah-boo mode, with the more righteous part of the press in pursuit.

So while Mil The Younger asserts that Labour acted with “utmost integrity” over Flowers, Young Dave is hell-bent on pinning the entire business on his opponents. And in a clearly co-ordinated assault this morning, the obedient hackery of the legendarily foul mouthed Paul Dacre has gone for Labour, the party that it hates and has never forgiven for, well, anything and everything they can think of.

“Expenses shame of Co-op chief: Flowers quit charity over '£150,000 false claims' yet was still put in charge of bank that loans millions to Labour” thundered one headline. Yes, Flowers personally gave out the cash. “Labour's £18m of loans from Co-op: Pressure mounts on Miliband over bank that showered its party friends with cheap cash” is another. See, it was cheap too!.

The thought that loans made when base rates are in the region of 0.5% will not be overly usurious is not allowed to enter. Instead, Stephen “Miserable Git” Glover is ordered over the top in support: “Why does the Left think it's irrelevant the Co-op boss is a coke-sniffing aficionado of rent boys?” he rants. Did he ask it beforehand? You jest. This is the Daily Mail we’re talking about.

But, as Jon Stewart might have said, two things here. One, the Co-Op bank took over the Britannia a year before Flowers was made chairman (and in any case he was a non-exec), and two, the Tories have no room to bang on about others doing Snow – as well as having equally little room to talk when it comes to their pals fouling up banks. Or can none of them remember five years back?

Why might that be? I say Dave, you haven’t been singing in the Key of C, have you?
Posted by Tim Fenton at 10:48

"Or can none of them remember five years back?"

Well, in the light of evidence given at the Leveson Inquiry probably not.

You could surmise but I could not possibly comment as I have no recollection, cannot remember or recall certain events.

(Does that meet the legal requirements or should we plead the Ernest Saunders defence?)

Of course if this was about probity the Naval ports deal and un-needed carriers would be subject to inquiry. Plus the massive PFI 'overspend' even what the public accounts committee admits to is massive f.. umm overspend. The QE beyond what was necessary to recapitalise banks. Then there is UK's complicity (active role) in torture and rendition yet Labour ministers not even sent to the Hague by Hague.

Point is this is politics and frankly not terrible and just muckraking. Labour would be hypocrites to suggest there was something wrong here.

As far as I know only 1 PM has been called a kindred spirit by Lord Dacre, Gordon Brown. Indeed the upshot of Leveson was how Brooks seemingly dictated Labour policy on Afghanistan under Brown.

Calling enquiries is what politicians do to object when Tories threaten to do so is silly. Indeed we probably need a genuine inquiry into banking and the connections of the Shadow Chancellor & former City Minister Balls as I refuse to believe he was merely completely incompetent as Labour fans contend.