Back to life has come the Plebgate saga, as Tory MP Andrew Mitchell has more or less accused one of the Police officers on duty in Downing Street on the evening of the fateful incident of lying. And, by mere coincidence, the Crown Prosecution Service (CPS) has also accused Channel 4 News of being less than honest, by asserting that the CCTV images previously broadcast had been “edited”. 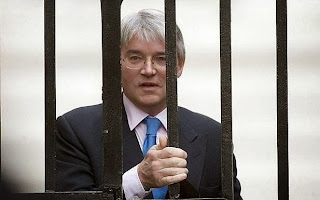 DPP Alison Saunders told that “The CCTV footage that has been aired publicly was edited and did not show the full picture”. The inference is that Channel 4 was engaging in some kind of sleight of hand. Their man Michael Crick was unimpressed: “C4 did NOT edit CCTV footage to change or alter sequence of events. Our 3 CCTV streams were image-matched frame-by-frame to confirm veracity” he countered.

Channel 4 and ITN concurred: “The CCTV footage was obtained by Andrew Mitchell from Downing Street and provided to Dispatches and Channel 4 News. The footage as broadcast for the first time on 18 December 2012 was not edited by the production team to change or alter the sequence of events ... Furthermore the three camera angles that we were provided with were image-matched frame by frame to confirm their veracity . We stand fully behind this investigation”. 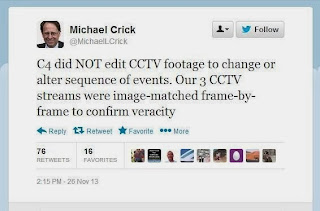 So perhaps the DPP will let us know exactly what Channel 4 News is supposed to have “edited”. And then they can let everyone know why PC Keith Wallis is the only one of a total of seven serving officers who is to be charged over the incident. The officer accused of dishonesty by Mitchell, PC Toby Rowland, who was not interviewed under caution, will not even face disciplinary charges.

And, as for Ms Saunders, who “said there would be no charges for officers who had leaked details to the media as a jury was likely to decide it was in the public interest for what had taken place to be made public”, that is not the point. It wasn’t the leaking, but the lack of candour, that has caused yet more mistrust in the Police.

As Mitchell put it, “I wish now to make clear that PC Toby Rowland, who was responsible for writing those toxic phrases into his notebook, was not telling the truth” and told of “the incendiary fact that armed police officers guarding officials in Downing Street have stitched up one of those they were supposed to be protecting. I have told the truth ... the police did not”.

Mitchell was right that if the cops could do it to an MP in Downing Street, they could do it to anyone, at any time. The DPP may have been convinced by submissions made to her, but many more among the wider public will not be. Andrew Mitchell was forced to resign and had his Parliamentary career trashed. And the impression given is that most of those responsible will get away with it.

There is only one conclusion that can be reached: that’s not good enough.

[UPDATE 1915 hours: the CPS and Cabinet Office have now "clarified" their statement that the Channel 4 CCTV footage was "edited". 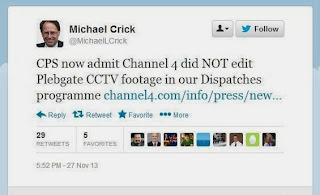 As Michael Crick has Tweeted, any suggestion that Channel 4 did the editing has been withdrawn. The only editing done to the footage was to pixellate some of the faces of those in the video. Sadly, some hacks - notably the Sun's non-bullying political editor Tom Newton Dunn - are set to auto-smear and so have taken no notice. No change there, then]
Posted by Tim Fenton at 16:54

It's a weird one.
I don't have that much sympathy for Mitchell as he practically admitted he was an arse to the police.
In addition there have been far worse cases of police misconduct with much much tinier media impact. One only has to look at de menezes oe Tomlinson for that.
However he has clearly suffered somewhat at dodgy behavior.
Hes also hardly been left destitute. 60000 a year for 10 days work at Investec since leaving front bench
I'm a bit torn to be honest.

Dodgy behaviour indeed. And not just by the police.

The incident involved one of the PMs team outside the PMs front door. You would have thought the PM would have been interested from the moment the story kicked off. And that a few minutes later it might have occured to him that the CCTV recording would be worth watching -after all, it's part of the security system for his home so there shouldn't be a legal problem.

Either iDave sat there like a rabbit in the headlights and let his mate be torn apart by the press and forced into resignation. Or he did have the recordings checked and knew what had happened - and still let the press have a field day.

I think he's got a few questions to answer himself.