You may not have heard of Brian Jarman. But if you pay attention to any of the increasingly heated debates about the NHS and patient deaths, you will be bombarded with figures that derive directly from his work. Because Jarman developed the Hospital Standardised Mortality Ratio (HSMR) concept, which has been used by the press to justify its scare stories.

When the Maily Telegraph splashes the entirely fraudulent claim that some NHS Trusts saw 13,000 needless deaths, or the Daily Mail ups the ante and thunders over a figure of 50,000, both of which were achieved by extrapolating from HSMRs, one might expect the man who spent fifteen years as Professor of Primary Health Care at Imperial College School of Medicine to cry foul. 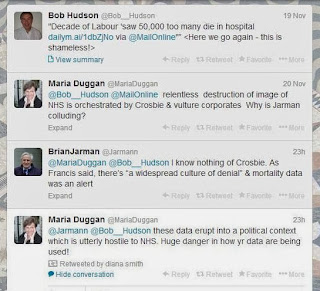 But that thought would be sadly misplaced, as Jarman has not raised any objection – not the teensiest of protests – to this flagrant misuse of his methodology. Indeed, only this week, following the Mail’s “Decade of Labour 'saw 50,000 too many die in hospital': Figures show 'abnormally high' number of people died at 15 health trusts during time party was in power” headline, he ducked the questions. 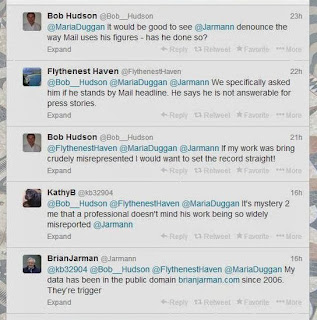 In the wake of the Mail headline, the question was put: “Why is Jarman colluding?” to which he did not issue a denial: “As Francis said, there’s a ‘widespread culture of denial’ & mortality data was an alert”. Again, the question was put: “It would be good to see Jarman denounce the way [the] Mail uses his figures – has he done so?”, and again he equivocated. 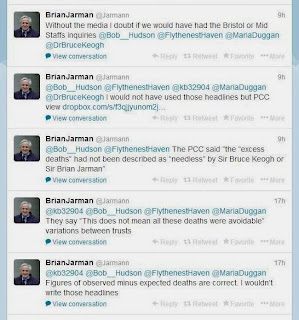 “My data has been in the public domain [link] since 2006. They’re trigger”. And a third time, “I wouldn’t write those headlines ... I would not have used those headlines”. His justification was simply “Without the media I doubt if we would have had the Bristol or Mid Staffs inquiries”. But this is not just media campaigning: it is a blatant and coordinated attempt to damage the reputation of the NHS.

Why would Jarman sit by and equivocate while such fraudulent acts are committed in his name? Ah well. As Steve Walker has observed, the HSMR concept has competition – “HSMRs only include a proportion of hospital deaths and do not include deaths within 30 days of discharge ... [they] face competition from the RAMI (risk-adjusted mortality index) promoted by a rival company, CHKS”.

But Jarman has no interest in Dr Foster Intelligence, who run the HSMR scheme. This is true. But his son Julian is a partner in the company that part owns it. So there is a family interest. And from what Brian Jarman has shown this week in the wake of the latest NHS scare story, he gives every appearance of putting the selfish protection of that family patch above defending the NHS.

Exactly how he salves his conscience as a result will be interesting to know.
Posted by Tim Fenton at 10:45

If its on iplayer yet have a listen to the science programme which was on R 4 about 4.30pm yesterday. A scientist making the point that there are virtually no scientists in Parliament. As a result they have no idea what questions to ask when presented with so called science based facts.

He has come with a a fact sheet for all MPs and suggests they have some training to make them aware of the pertinent questions to ask to begin to quesiton figures and to understand what the answers mean.