In an long, rambling, self-serving and stupendously petulant outburst today, former Tory MP Louise Mensch has penned what is intended to be a “J’accuse” against the deeply subversive Guardian, but turns out to reveal absolutely nothing, and certainly provides no content of evidential standard to back up her tiresomely repeated claim that “agents’ names” have been “trafficked”. 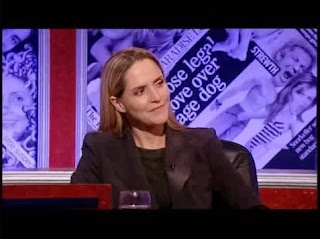 Has she got news for us? Not just yet

Unlike Ms Mensch, I won’t bother with the paragraphs of ranting hyperbole, but will deal with her evidence directly. Here’s a quoted passage from a New York Times article: “Even with terrorists, N.S.A. units can form a strangely personal relationship. The N.S.A.-G.C.H.Q. wiki, a top secret group blog that Mr. Snowden downloaded, lists 14 specialists scattered in various stations assigned to Lashkar-e-Taiba, the Pakistani terrorist group that carried out the bloody attack on Mumbai in 2008, with titles including ‘Pakistan Access Pursuit Team’ and ‘Techniques Discovery Branch’. Under the code name Treaclebeta, N.S.A.’s hackers at Tailored Access Operations also played a role”.

This is held to prove that “agents’ names” were given away. There is only one problem. No agent is named. Not one. But, like the man said, there’s more.

And here it is: “But most striking are the one-on-one pairings of spies and militants; Bryan is assigned to listen in on a man named Haroon, and Paul keeps an ear on Fazl”. See, there are names given! Here is the proof that will see Alan Rusbridger off to the Tower of London in irons!

But there is an obvious problem here: quite apart from the hyperbolic froth of “muling” and “trafficking”, Ms Mensch is also clearly credulous, to the extent that she believes these are real names. There is a clue here: although sometimes spelt with a “Y”, the most common instance of the name “Brian” in the UK is not spelt that way. This suggests the NYT added the name to personalise the story.

The idea that the NYT would not only have the names, but just reproduce them – especially as there has been, as a reading of the article shows, contact with the NSA to ensure their security concerns are addressed – is laughable. What is also involuntarily hilarious is Ms Mensch’s yelling at former colleagues David Davis and Dominic Raab for having the effrontery to take a different view to hers.

“How bloody terrifying to think that but for a public meltdown [Davis] could have been Home Secretary. And when Julian Smith challenged the Guardian in a Westminster Hall debate, the Tory MP Dominic Raab said that he was scare-mongering. I wonder what those two of my former colleagues would say now”. They’d say the same, and like the Guardian’s editor, they’d ignore the paranoid whining.

Louise Mensch has persuaded nobody who matters. Not waving but drowning.
Posted by Tim Fenton at 16:28

Ah the 'feminist' who married money and works for The 'tits out' Sun newspaper!