Interrupting its usual diet of miracle cure, pension, and weather frighteners, the Daily Express has today returned to kicking the hated Eurocrats and scaring its dwindling band of readers by shouting long and loud about all those people talking foreign who are going to come here just to claim benefits. “Crackdown On EU Migrants” proclaims the front page fraudulently. 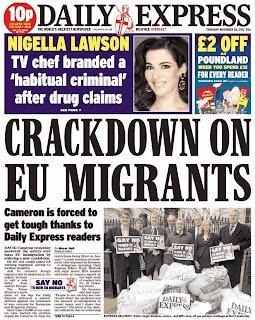 Oh no there isn't

On top of that is the paper’s attempt to use real and official statistics to play the numbers game, and so we also get “EU migration behind half a million new immigrants entering UK, latest figures show”, the sub-heading explaining that “IMMIGRATION into the UK is running at more than half a million a year, with EU migration fuelling the population growth”.

In the former case, as I pointed out yesterday when filleting similar assertions from the Daily Mail, there was no new crackdown, as Young Dave has not – contrary to what Express man Macer Hall is saying – ordered any new restrictions on benefits, as anyone coming to the UK from other EU member states cannot claim them immediately in any case.

And in the latter, when it comes to using those official figures, well, two can play at that game. I too have the ONS numbers which the Express is using to frighten the readers about immigrants (you can see the release HERE and the relevant table is 2.03, available in spreadsheet form). And the first thing that has to be said is that the Express’ “half a million” number is approximately right.

However, and with such arguments there is inevitably a however, this is the total inflow of people (that being both EU and non-EU). Of these, other EU member states contributed just 148,000. And, as with any two-way street, there is also an outflow, which the Express manages to miss. This number is 321,000 for 2012, of which 75,000 were nationals of other EU member states.

So we can, as they say, do the math, and get the Net Migration, which, after all, is what will produce all that strain on hospitals and schools that papers like the Express enjoy banging on about. This amount was just 177,000, or around a third of the Express’ Very Big Scary Number. And almost 70% of that net migration was from outside the EU. As Winshton might have said, “shome fuel, shome growth”.

The net migration from other EU member states was just 73,000. That’s less than 15% of the headline number that the Express is pitching. Now, papers are free to put forward their point of view on any issue, but the “half a million” figure linked to the EU is downright dishonesty. One might even suggest that Richard “Dirty” Desmond and his staff may have their trousers well alight.

But it moves papers, and that means it’s another Benchmark Of Excellence!
Posted by Tim Fenton at 17:28

What a weasel word 'fuelling' is. It's a bit like saying WW2 was won after the Dominican Republic came in on the allied side. Technically true, but missing the point a little.

The vast majority of non EU migration inwards (students and ICT high skilled workers) are strictly limited on how long they can stay in the UK. EU migrants have no such restrictions by law, even if they do in practice leave.