Hailing from Pontypridd in South Wales, “nu metal” band Lostprophets sold millions of albums and for many years toured the UK and USA to some acclaim. But the music stopped very suddenly last year when frontman Ian Watkins was charged with a series of child sex allegations, some of which this blog is not going to go anywhere near. This week he pleaded guilty. The band has now split up. 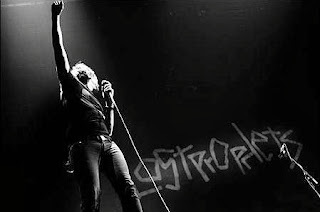 We won't be seeing this again

Watkins spared his victims and their families further stress: “He accepts he was a determined and committed paedophile”, the prosecution told. The singer had accumulated a series of images and videos. The BBC advised that “One laptop seized from Watkins's home was password protected ... which was uncovered when it was sent to GCHQ to be cracked”.

“The police faced serious questions last night over why they failed to act sooner to stop Lostprophets singer Ian Watkins [it’s always “last night” in tabloid land] ... From early 2010 horrified fans who had become friends with Watkins went online to beg for help after discovering vile images on his computer”. Well, up to a point, but the rozzers were not the only ones who should have been on the lookout.

High profile bands are signed to management companies, who, in the case of Lostprophets, one might have expected to pick up on such serious allegations. So which of these companies had signed Watkins and his pals? Step forward Q Prime, based in New York City, the same outfit that looks after Jimmy Page, Metallica and the Red Hot Chilli Peppers. 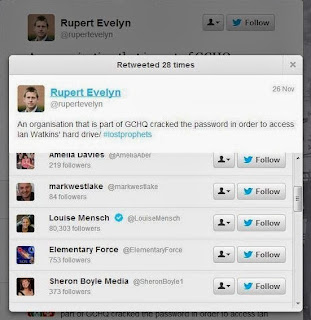 The third wife of Q Prime’s co-founder certainly recognised the name of Ian Watkins the other day: former Tory MP and now self-appointed know-all Louise Mensch was sufficiently up to speed to seek out a Tweet about Watkins’ laptop allegedly being cracked by GCHQ and Retweet it. One assumes that she and Peter Mensch, co-founder of Q Prime, on occasion talk to one another.

So what did Q Prime do about Ian Watkins? It’s interesting to see the company’s website has no trace of the band – well, they’ve broken up, and so there’s a good reason for that – but there has, it seems, not been any word from Peter Mensch or anyone else at Q Prime. The BBC suggests he signed Lostprophets. And Watkins’ habits were known about back in 2010. So the question must be put.

What did Q Prime know about Ian Watkins, and when did they know it?
Posted by Tim Fenton at 10:13

By Louise Mensch's reckoning (as in the case of Reverend Flowers and the Labour Party) if you know someone and they did wrong, you did wrong as well.

So this is awkward.

Let's hope no one involved knowingly "muled" any CDs connected with Ian Watkins or his work.

If you have a confidential relationship with a client and you know they are doing wrong, you do NOT tell the police about it. You urge the person to hand themselves in, and if they refuse, resign their business.

If you have a confidential relationship with a client and you know they are doing wrong, you do NOT tell the police about it. You urge the person to hand themselves in, and if they refuse, resign their business.

Oh really Anonymous? I'm no lawyer, but that sounds like an effective way to land yourself in the cell next door to your client.

One hopes that La Mensch wasn't one of those crticising the BBC for "not knowing" or informing the relevant authorities about Saville.

Could be a bit awkward otherwise?