Littlejohn Handed His Arse On A Plate

One potential target of complaints to any new and independent press regulator is bound to be the Daily Mail’s tedious and unfunny churnalist Richard Littlejohn, who was memorably excused by the PCC telling a complainant that it was OK for Dick to make totally untrue statements because it was an opinion column and so this was acceptable behaviour. 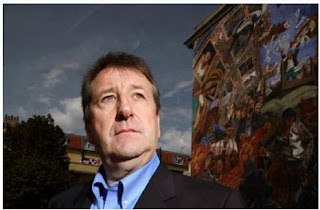 So, having been patted on the head by his legendarily foul mouthed editor’s remote control device (that’s the PCC, folks), Dick clearly believes that he can serve up as many whoppers as he can squeeze into every piece he writes. And that meant today’s offering from the sage of Vero Beach (not in the UK) was so full of serial dishonesty that its main target has had no problem taking it apart.

Dick’s subject is Ms Jack Monroe, who has committed the unforgiveable sin of writing for the deeply subversive Guardian. “Ah, Pesto! These poverty poster girls of Welfare Britain want the gravy too... without having to pay for it” he proclaims. So what has Ms Monroe done to cause Dicky Windbag such offence? Simples. She had to change jobs because of having a child to look after.

This process did not happen instantly, and so Ms Monroe spent a period having to claim benefits. But now that she has secured a new job, she no longer claims. This is a problem? Ah well. She has also featured in a Labour party political broadcast. So Dick gives her the full smear, with plasma screen TVs, Laptops (“state funded”), and the suggestion that she is still on benefits (all wrong).

Ms Monroe has countered Littlejohn’s pack of lies, and you can see the demolition job HERE. But she only touches on Dick’s sheer ignorance of what ordinary folk eat nowadays, perhaps because he’s lived in Florida for so long. He sneers at pesto: “they probably think it’s some kind of fancy foreign gravy mix”. Where d’you think I first bought pesto, Dicky Boy? I don’t shop at M&S or Waitrose.

No, I first bought pesto at Aldi. You know, the kind of supermarket that the less well off frequent (plus those of us who just want decent value for money). The same place I buy ciabatta, baguettes, olive oil, sundried tomatoes, artichoke hearts, Borettane onions, sea bass, coconut milk, Thai mushrooms, passata, chick peas, pate, and rollmop herrings. Ordinary people buy and enjoy all of these.

Oh, and I almost forgot pasta, which Dick thinks ordinary people only enjoy when they open a can of spaghetti. Yes, not only is the supposed voice of ordinary people a serial and wilful liar, he’s also totally out of touch with the reality of life for the lumpen proletariat of the UK. He even mocks Ms Monroe’s Christian name (Jack) without it occurring to him that it’s a not uncommon abbreviation.

Dick, you’re a dick. We’re not laughing with you. We’re laughing at you.
Posted by Tim Fenton at 13:09

The Great Windbag must be aglow with rage that he missed that jack is a lesbian. Throwing some sneery comment into the mix would've rounded the article off nicely.

I wonder if he is still stuck in the 1970's? Based on his knowledge of what ordinary people can eat at home...

John. His taste in TV entertainment certainly is. The Sweeney, Minder,
Porridge, etc regularly feature in his columns. There's probably a shelf full of DVD boxsets at a certain house in a Florida gated community.

I have two jars of pesto at home, and I'm on benefits. Sainsburys had a money-off offer, but it's still quite clear that us mentally-ill disabled benefits-claimants get far too much money to spend on tasty pesto when we could be digging for roots.

Had a little chuckle with the
"nice work if you can get it"
comment re Michal Husain in the same column.
You couldn't make . .
Ah you know.