The weather is turning colder – but then, hey, it’s January, and we’re in the depths of winter, so this should come as no big deal. But at the Express, with its requirement to put together front page splashes for as little as possible, this means it is time for Nathan Rao, weather “expert” extraordinaire, to frighten the readers by telling them that an apocalyptic freeze is nigh. 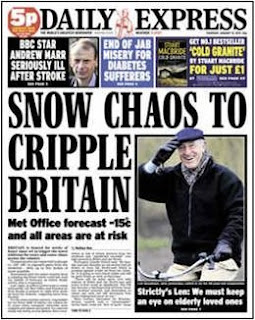 “Snow Chaos To Cripple Britain” screams the headline, as Rao creatively interprets a Met Office forecaster’s prediction that “There will be some snow over hilly ­regions of Wales and the North-east” as the coming of the end times. Fortunately, Rao has dispensed with the services of Jonathan Powell, but I’m sure this blog’s recent discussion of the latter’s discredited past is a mere coincidence.

Replacing the man from Exacta Weather in today’s Express frightener is our old friend Piers Corbyn of Weather Action, whose trumpeting of his past accuracy includes the gem “May 2012 forecast: the coldest or near coldest May for 100 years in Central and East parts ... was an important success even though the last week turned warm”. It was as predicted, except when it wasn’t.

Corbyn also makes a prediction for the coming year: he sees the coming of “Totally desperate distortions and brazen lies from the CO2 warmistas / BBC who will continue to claim all extreme events, including the many we predict using solar activity, are caused by CO2.. Politicians must be attacked for following this lunatic sect – which must be destroyed”.

D’you know, I can’t imagine why some people characterise the climate change denial lobby as being swivel-eyed ranters, but there you go, that’s who Nathan Rao is turning to for his latest scare story. But is there really going to be all that snow and freezing weather? The answer is that we can’t be certain, with milder air from the west fighting it out with very cold air from the east.

We can see this from the Atlantic Jet Stream forecast for next Sunday, where the winds in the upper atmosphere are coming from the west, but then diverting south before bringing their milder conditions to the UK. Meanwhile, there are high level winds from the east, also not covering the UK, but undoubtedly bringing a cold easterly component to at least the east of England.

However, and with this business there is inevitably a however, looking forward to the Jet Stream forecast for Wednesday of next week, a westerly high level wind, although not such a strongly influential one, features. What this means is not only that we cannot be certain about how the weather will turn out, but that these events have a habit of changing on a daily basis.

But that would not frighten readers and move copies of the Express, would it?
Posted by Tim Fenton at 10:56

It would be a nice thought, but you didn't think they'd leave Jonathan Powell out in the cold did you! Sadly, here he is about 3/4 down the article on the Express site, and the end is nigh as usual:

He warned the entire county is braced for snow with up to five inches possible even on low ground in central, eastern and northern parts. He said: “We are looking at a freezing blast from the East and Russia setting in from the weekend, and this time it threatens to really deliver.

“Snow is possible from Sunday, with the South and London also likely to see some going into next week with up to five inches possible. From Monday we are expecting a rash of showers mostly to the North and the East, but nowhere is off the hook.

“We are also looking at severe and penetrating frosts with temperatures as low as -15C in exposed parts, it is going to last into next month when things could get even worse.”

Did Corbyn make the Global Warming claims in today's Express, if so looks like they have now been removed from the article.

Corbyn's comments were made on his own Weather Action site, and two links are included in the text.