One hates to have to point out to Daily Express weather “expert” Nathan Rao that he is barking up the wrong tree, but he is doing just that today. While the real weather story is that conditions are about to get milder, windier and wetter, and that a raft of flood alerts are already in place, poor Nathan is still trying to frighten his readers with “Killer Freeze Set To Get Worse”. 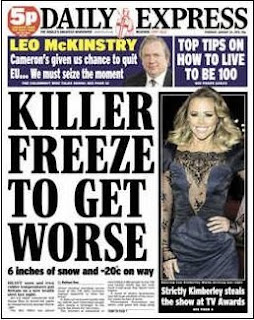 Even the opportunity to educate his audience on the basics of winter conditions – such as a change to milder weather bringing snow on the leading edge of the approaching weather system, due to the already cold air – is passed up as he trowels on the “up to” six inches of snow tomorrow. That this will soon turn to rain and therefore melt away does not interest him.

Contrast Rao’s article with Rob Williams at the Indy: “Nearly 50 flood warnings are in place across Britain as the country prepares for a combination of heavy rain and a rapid thaw of snow and ice. Flood warning have been issued across much of the UK as ice starts to melt and forecasters warn of heavy rain sweeping across the country”. So, for the Express’ “expert”, this is what’s actually happening.

Here’s the Atlantic Jet Stream forecast for tomorrow: the intense south-westerly upper air winds are petering out as they approach Europe, and this means the approaching thaw will come only slowly at first. 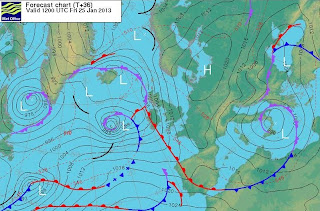 Now check out the Met Office synoptic (or pressure) chart for 1200 hours tomorrow. Here, the approaching low pressure area has almost reached the UK but is still slow moving. On the leading edge of that system will be the initial snow, before it turns to rain and the thaw sets in. 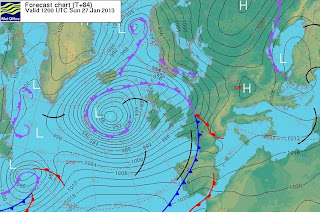 Moving on to the corresponding Met Office synoptic chart for Sunday next, you can see a rather more intense low pressure system to the north west of the UK. This will bring strong winds and a succession of perhaps heavy showers, following on the initial frontal system, which will have had more organised rain on it.

And then here is the Atlantic Jet Stream forecast for next Tuesday, showing the upper winds getting properly organised and pushing through over the UK. These will bring yet more weather systems, along with more rain, although temperatures will by this point be relatively mild for the time of year, meaning the climate change denial lobby will quieten down and find something else to complain about.

As the ground is already close to saturation in many areas, the risk of further flooding is therefore somewhere between very likely and a racing certainty. Hopefully by the time that happens, Nathan Rao and his favourite forecasters will have caught up.

In the meantime, if you want the right story on the weather, look in on Zelo Street.

[UPDATE 26 January 1420 hours: Nathan Rao and the Express have caught up with Zelo Street, albeit two days late. Today's front page splash was "Now Britain's On Flood Alert", complete with suitably apocalyptic predictions from none other than Jonathan Powell, now of Vantage Weather Services.

In any case, that the thaw has started is already obvious to those able to indulge in the practice of looking out of the window and seeing the melting snow. But in the meantime, the Express has managed to get two front page stories out of the one weather event, which means even more money for Dirty Des]
Posted by Tim Fenton at 18:52