The notion of dreaming up very large and scary numbers to pretend that public servants cost a lot more than they really do is not a new one: recently I observed the way in which the so-called Taxpayers’ Alliance (TPA) had used figures selectively to suggest that Police officers cost a lot more than they actually do. And the TPA has been on hand to support a similar attack on the European Parliament (EP). “Every MEP in Brussels costs an 'eye watering' THREE times more than MPs in Westminster” screamed the Mail Online headline, as readers were told that each MEP cost £1.8 million a year against a mere £590,000 per Westminster MP, while those sitting in the House of Lords cost a paltry £130,000. But seasoned EP watchers may by now be experiencing a sense of déjà vu.

That’s because we’ve been here before: back in June 2009, Open Europe – no friends of the EP they – was pitching the very same number on the cost of MEPs, but its figures for the Commons were £364,000 and for the Lords £208,000. So what the Mail is not telling is that, while the cost of MEPs has in real terms actually fallen since then, that of MPs has risen by around 60%. 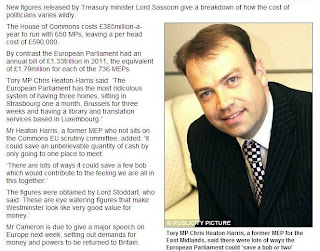 Spot the howler ... and the wide boy

And on top of that, the Mail has allowed an elementary error into its calculations: 736 MEPs at £1.79 million is held to be £1.33 trillion, so just a thousand times out, then. Then there is the credibility problem of those backing the why-oh-why stance: regular Zelo Street readers will recognise the mugshot of Tory MP for Daventry Chris Heaton Harris, because of his role in the Corby by-election.

Heaton Harris was in charge of the Tory campaign, but had also given assistance to the bogus candidature of James “saviour of Western civilisation” Delingpole, whose anti-wind farm platform was never put before the electorate. Del Boy withdrew his name from the race after Tory minister John Hayes coincidentally made a speech suggesting a change of direction on wind power.

The Greenpeace sting of Heaton Harris appears to have been forgotten, and he is therefore quoted approvingly on the subject of the EP. So is the TPA’s chief non-job holder Matthew Sinclair, who pontificated “Taxpayers will be angry that the European Parliament is being so extravagant with their cash when it comes to organising its own affairs”. Not nearly as angry as about the misrepresentation, I suspect.

And save us the sick-making sight of peddling the opinions of UKIP’s MEPs on the subject of waste. After all, Nigel “Thirsty” Farage and his merry men are the epitome of useless gravy train exploiters. Owning up to the flaws in the methodology would be nice, too: the Westminster numbers ignore such things as rents, while those for the EP include all relevant costs.

Still, there will be a few more EU haters as a result, so that’s all right, then.
Posted by Tim Fenton at 18:19