Following Lord Justice Leveson’s report, and the passing of the old year, it is perhaps time to see what progress has been made in maybe implementing some of his recommendations. And, sad to say, what has been turned up shows that there has been virtually no progress, with the thought occurring that the Fourth Estate and its friends are hoping all will go quiet and allow them to carry on as before. 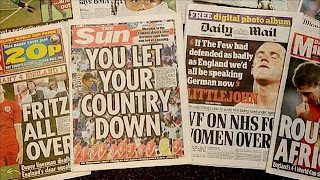 You think I jest? While those at the Hacked Off campaign, who at least have a petition with over 147,000 signatures behind them, are maintaining the pressure on the Government, with Brian Cathcart’s Comment Is Free piece from yesterday well worth reading, the establishment view, typified by Tim Luckhurst, is one of no longer even pretending that they are interested in a new press regulator. 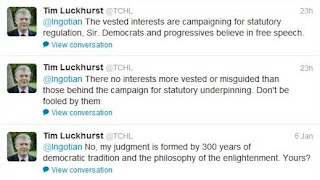 Luckhurst, who is representing the vested interests of most proprietors and editors, has taken to denouncing anyone such as Hacked Off as, er, being the representative of vested interests. He then moves right along to accuse anyone opposing him of being intolerant of dissent, but as this blog has found, Luckhurst’s own response to dissenting views is, er, intolerance – followed by abuse. 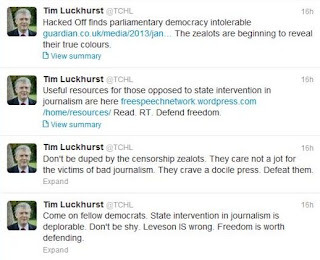 This is accompanied by the continuing claim of democratic legitimacy, although as far as is known, neither Luckhurst nor any of the bosses or editors has successfully run for elective office in the recent past. Then anyone not happy with the status quo is dismissed as a “zealot”, a term much used by Melanie “not just Barking but halfway to Upminster” Phillips, whose zealotry is without parallel.

And all the while, Hacked Off and anyone daring to speak in their favour are roundly condemned as being in favour of “censorship” and against “freedom”. Meanwhile, there is no move to bring into being that independent press regulator that was going to happen soon. Editors were working to agree the details. Young Dave had them in for a jolly good chat. And then there was silence.

That silence is why Brian Cathcart and Hacked Off are pushing for action – because not only is the Fourth Estate not taking any, it is also getting its cheerleaders to smear any perceived opposition with the express intention of keeping attention elsewhere, in the hope that nobody will notice when the new regulator is unveiled and turns out to be the same press doormat as the last one.

This is the point that Tim Luckhurst and his pals will not address: there will, if his attacks are successful, be no truly independent regulator of the press. Editors will continue to interpret the rules to ensure that they get the results they want, and stuff the interests of anyone who gets in the way. That is what all the guff about “freedom” really means: the public is free to get shafted. And that’s not good enough.
Posted by Tim Fenton at 15:48

Seriously Tim, did you really expect anything to come out of Leveson to reign in the press?
It has been attempted before and no doubt will be again, and that too will have the same outcome, lots of critical words, but sweet FA in the way of action.