Having to withdraw allegations – more prosaically publish a “correction” or “clarification” – is an occupational hazard for newspapers. On occasion, a paper might have to yield to its target on more than one occasion. But to have to back down four times in three months suggests an attack campaign that has gone seriously wrong. So which paper is it, and who’s their target?

No prizes for guessing that the rag in question is the home of Rupe’s downmarket troops, the Sun. And its target, ever since the paper decided it would about turn and go in to bat for Young Dave, has been Pa Broon. The Murdoch press could not as much as think of leaving Brown be after he left Downing Street, especially given his continuing presence in politics.

So out came the attack doggies, led last September by the loathsome Toby Young – whose services the paper has wisely dispensed with in the meantime – talking of “Toffs who play at being comrades”. Tobes managed not to mention that Brown’s fees for his speaking engagements do not go into his own pocket, but help fund the charitable work done by him and wife Sarah.

Four days after the “clarification” on Tobes’ piece, there was another issued over an article last July that managed not to mention that Brown’s staff expenses also did not go into his own pocket. This time, the Sun was additionally persuaded – maybe there was more than just the one solicitor’s letter this time – to tell its readers that the former PM had renounced the Prime Ministerial pension to which he is entitled.

So was that all? Sadly for the Murdoch faithful, no it wasn’t: this month brought yet another “clarification”, admitting that Brown did not claim accommodation expenses when visiting London on parliamentary business. This time, there was the addition of a brass neck component, as they blamed the Tories. So that’s an admission of using a partisan single source for news items, then.

And it wasn’t over, even then: yesterday brought the fourth “clarification”, over the Sun’s story alleging that Brown’s press conference at the UN was cancelled because only one reporter turned up. It was actually canned as he was delayed attending another meeting which was paying tribute to Aung San Suu Kyi. That’s another story they didn’t bother checking out before publishing.

On top of all that, Rupe’s downmarket troops bring the pretence that they are actually bothered about getting the right story before putting the boot in: “Our journalists strive for accuracy but on occasion we make mistakes”. That’s one fresh and steaming pile of bullshit for you.

All they’re striving for is to smear Gordon Brown. No change there, then.

[UPDATE 14 March 1400 hours: and still the apologies keep coming. Today has brought the retraction of assertions made by veteran hack Trevor Kavanagh - recently roped in to sit on the body that will govern who gets to be on "Son of PCC" - that Brown had accused the Sun of blagging his son's medical records. 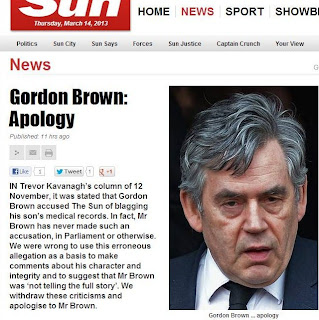 There you have it: "We were wrong ... We withdraw these criticisms and apologise". How many more climbdowns will there have to be before Rupe's downmarket troops start to behave themselves? Or is no consideration given that the paper may be spraying its remaining credibility up the wall?]
Posted by Tim Fenton at 10:20