Actually, the 150th anniversary of the first public passenger service on what is now part of London’s Underground network is tomorrow – today’s birthday celebrates those who were privileged enough to get a seat on the preview trip, a day before opening. To mark the occasion, Zelo Street will be showing views from the Underground for the next few days. 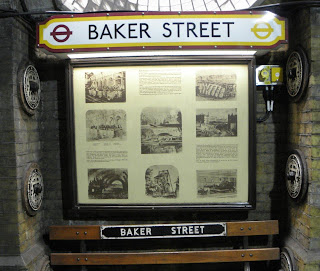 And here is where it all began, at Baker Street, where the building of that first line is detailed on displays in the alcoves on what are nowadays the Hammersmith and City and Circle Line platforms. Tunnelling was by “cut and cover”, which meant digging a trench (the “cut”) which was then covered over by the roadway above. Much of that original line runs under thoroughfares like the Euston Road. 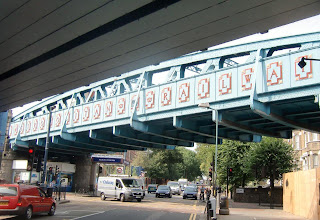 One of the main players in the development of the system was the Metropolitan Railway, whose name is picked out on this overbridge span at Kilburn Station. The tracks carry City-bound Metropolitan and Jubilee Line trains. 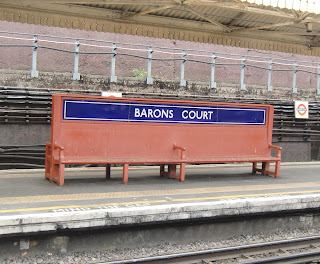 Some features like platform furniture are occasionally unique to one station – as in these “big seats”, which you can only find at Barons Court, east of Hammersmith, where the Heathrow bound Piccadilly line tracks come to the surface. 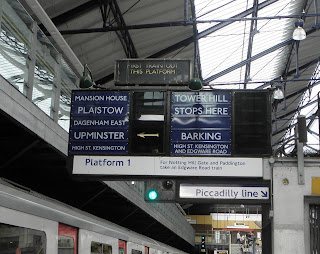 Another unique feature is the quirky old train indicators at Earl’s Court, surviving probably because they work and everyone understands them. Elsewhere on the system, digital displays have taken over (yes, the train in the platform is not merely going to Barking, but all the way to Upminster). 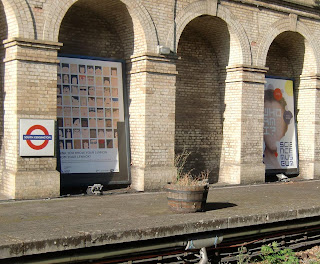 And some parts of the Underground have fallen into disuse: the retaining wall and posters at South Kensington form the backdrop to the redundant north side platform. All eastbound trains now use the island platform opposite, which is far better for passenger flow – and interchange with the Piccadilly Line below. 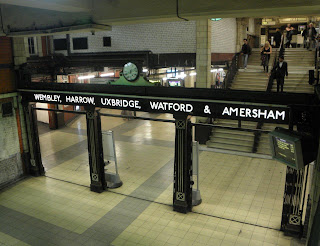 Which brings us back to Baker Street, and the “gateway to Metroland”. Once upon a time, the trains went a lot further than Amersham, but nowadays that is as far as the Underground ventures out of central London.

More posts to come, with views from the early days of the system, through the modernism of the 1920s and 30s, to the most recent landmarks of a network that many love to hate, but without which the capital would most likely cease to function.
Posted by Tim Fenton at 11:06