Today we remember the millions killed – most because they were Jewish, although there were many more, such as Roma – in the Holocaust, mainly in the extermination camps run by the Third Reich and principally following the Wannsee Conference and the pronouncements of one Reinhard Heydrich, killed soon afterwards by a particularly discerning band of Czech partisans. 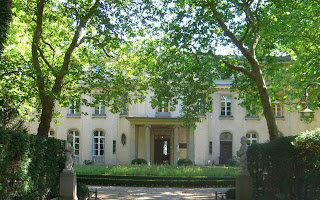 The Wannsee Conference House. If visiting Berlin, you must take time out to take in the permanent and free exhibition on the Conference here

Among those who participated willingly on the side of the Nazis at this time was an SS Doctor called Aribert Heim, whose nickname of “Dr Death” I mentioned yesterday, when noting that The Commentator, that right-leaning source of false righteousness, had been calling out Lib Dem MP David Ward for inappropriate language while themselves applying the nickname to Lord Justice Leveson.

Heim was a particularly nasty character whose treatment of Jewish inmates echoed that meted out by Josef Mengele at Auschwitz. Unlike Mengele, however, Heim managed to evade any subsequent trial, later fetching up in Cairo, living under the alias of Tarek Farid Hussein and ultimately dying there in 1992. But his record has not stopped others using his nickname against Jewish people.

Moreover, it should surprise nobody that The Commentator and its allies went after a Lib Dem MP (Ward has since apologised), knowing full well that some of those allies had earlier pinned the “Dr Death” label on another Lib Dem, who was also Jewish. The unfortunate recipient of this particularly nasty smear was Evan Harris, former MP and now campaigner for free speech.

The campaign of unpleasantness was kicked off by then Daily Mail pundit Leo McKinstry, who claimed that the “Dr Death” nickname was used by other MPs. This was then echoed by two other pundits who are old enough to know better, Cristina Odone and Damian Thompson at the Telegraph. It was also used by good Christian Tim Montgomerie, of ConservativeHome fame. 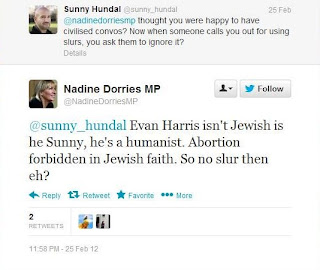 But only one MP joined in this singularly nasty campaign, and it will surprise no-one to know that the name in the frame is (yes, it’s her again) Nadine Dorries, who excused her characterisation by asserting that Harris was no longer Jewish. But, as any fule kno, being Jewish is not merely a question of religion. It is an ethnicity. One might expect a serving MP to be able to grasp such an elementary point. 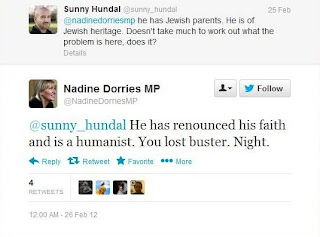 I have no doubt that Ms Dorries, along with Thompson, McKinstry, Montgomerie and Ms Odone, will claim that they will observe and respect Holocaust Memorial Day. Thus their utterances for public consumption. But that they have been so ready to tar a Jewish politician they don’t like with one of the Holocaust’s most notorious nicknames tells you all you need to know about their character.

And that is that rank and stinking hypocrisy is shared by all of them.
Posted by Tim Fenton at 18:28

And that is that rank and stinking hypocrisy is shared by all of them.

Pretty much applies to anyone giving credence to the Jewish publicity stunt that is Holocaust day.

That a comment is published should not infer that I agree with the sentiment therein.

Holocaust Memorial Day is marked for a very good reason, and is certainly not a stunt of any kind.