Boeing’s 787, aka the DreamLiner, is the company’s first completely new build aircraft for some years and intended to succeed the 767 model. It is claimed to be the most fuel efficient commercial airliner in its class, and uses carbon composite materials in its construction to keep weight down. And its launch and production have been severely delayed. 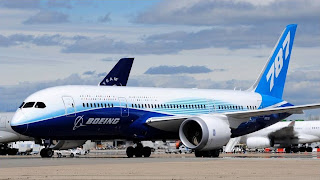 But now the 787 is in service, and yet again there are problems, to the extent that first Japanese carriers, and then the authorities in the USA, grounded all the aircraft so far produced. It is the first type grounding since the McDonnell Douglas DC10 in 1979, following a crash near Paris resulting from a cargo door malfunction, and the very public crash of American Airlines flight 191 departing Chicago.

And the memory of the DC10’s early years – the plane was cleared for a return to service and then enjoyed a good safety record – is the kind of thing that drives attitudes to safety today. It is not that grounding suggests the 787 is unsafe, rather, it is the drive to demonstrate that it is safe, and thus maintain the industry’s good safety record and retain public confidence.

What’s the problem with the 787 right now? Mainly the lithium-ion batteries, which have managed to catch fire more than once. Other more minor areas are the fuel system leaking and a cracked cockpit window (both probably assembly or maintenance issues) and a brake problem (probably materials failure). None are nearly as serious as the DC10’s rear cargo door.

That last had a mechanism which could show it was secure when it wasn’t, leading to blowing out in flight, causing an explosive decompression, and collapsing the cabin floor. We’ve moved beyond that kind of thing today, and well beyond the first passenger jet, the Comet 1, which suffered a number of fatal crashes before being grounded, mainly due to metal fatigue.

So, as with the helicopter crash yesterday, don’t let the 787 grounding put you off air travel, and don’t let it put you off flying on a 787 when they come back into service, which should not be very long.
Posted by Tim Fenton at 17:15

Wasn't Concorde grounded after the Paris crash in 2000?