The strange story of Lithuanian single mum Natalija Belova has taken another turn since Zelo Street last checked it out (you can see Sunday and Monday’s items HERE, HERE and HERE), as the less scrupulous part of the press has jumped on the bandwagon, and Ms Belova has – possibly not her soundest slice of judgment – put herself on public view by appearing on ITV’s This Morning. 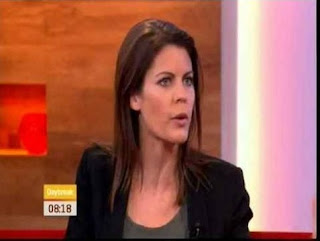 Liz Fraser - talking while not listening

That last happened on Tuesday, by which time the story as first trailed by the Murdoch Sun had already been well and truly filleted, but this did not stop the punditry of Liz Fraser, who was described as a journalist, but is also a regular presence on the show. Ms Fraser told how she recently offered to work a day in a coffee shop for nothing, but then, she can afford to do so.

Meanwhile, the Desmond press had arrived a day late, and didn’t even bother to credit the Sun for the story. But they kept the hate campaign going: “A Clear Case For Reform Of Our Soft Welfare System” thundered the headline, followed by “though the sight of smug, satisfied Ms Belova may make your blood boil save your anger for the Labour government that created this shameful state of affairs”.

Sadly, they weren’t finished there, as a follow-up rant by Chris Roycroft-Davis (who he?) told that “Life’s A Beach For A Benefits Tourist From Lithuania”, which Ms Belova is not, having lived, worked and studied in the UK eight years, adding “mum from Lithuania refuses to work but can afford foreign holidays and designer clothes at the taxpayers’ expense exposes everything that has gone wrong in Britain”.

But she does work, except that apparently doesn’t count: “a cushy part-time job working from home”. And the odd whopper is thrown in, too: “at the age of 30, Natalija effectively opted to take early retirement”. But all the while, Dirty Des’ finest have not stopped to ask why the Mail pulled its version of the story, and why they forgot Ms Belova being spent up on her three credit cards.

Moreover, the actress side of things also got forgotten, but then, perhaps they had advance information: Ms Belova’s CastingCallPro profile, which was edited between the Sun article appearing and Monday afternoon, has now been deleted. A message “Sorry this user is no longer on the system” is returned. Why this should be is a mystery, as her Model Mayhem page is still live.

And that still does not explain why her photo portfolio includes snaps by top press photographers. All that has happened this week is that Natalija Belova has been wheeled out to enable an array of hacks, pundits and presenters to project their own opinions – and prejudices – onto her backstory. Even This Morning did not give her the chance to get more than a few words in edgeways (thanks Liz).

Would it not be expecting too much to ask someone to get the real story on her?
Posted by Tim Fenton at 16:49