Today has been Inauguration Day in Washington, DC, as Veep Joe Biden and then President Barack Obama have been publicly sworn in for their second terms (the actual ceremony, which had to be performed by January 20, was performed in private yesterday, but the public ceremonial could not take place on a Sunday). There have been songs, and of necessity, speeches. 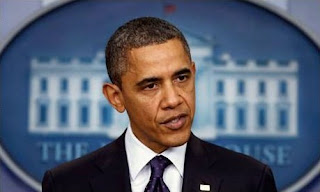 Obama is inevitably compared on occasions such as these to Martin Luther King Jr., and the parallel was especially marked, as it was also MLK Day. It’s true that Obama can turn on the soaring rhetoric on set-piece occasions such as this one, but his speech will be remembered more for the themes that ran through it, “We the people” and “Our journey is not complete”. 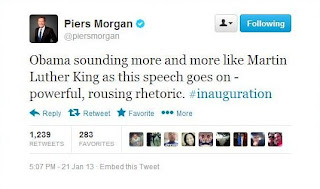 The latter is where the King connection comes it, as it echoes Dr King’s very last speech, at Mason Temple in Memphis, TN., which included the memorable “I just want to do God's will. And He's allowed me to go up to the mountain. And I've looked over. And I've seen the promised land. I may not get there with you. But I want you to know tonight, that we, as a people, will get to the promised land”.

One day after he gave that speech, King was shot dead on the balcony of the Lorraine Motel in Memphis. His sense of foreboding was right. But he was also right that African-Americans would get to the promised land: the USA has elected its first African-American President, and last November it re-elected him, in the teeth of opposition that has at times gone beyond the merely hostile.


But no, although I am an admirer of Barack Obama, he does not match the sheer electrifying power of Martin Luther King’s oratorical presence. Just to give an example, here is the video of that last speech in Memphis, made the day before he was assassinated. Obama is presidential, and he is charismatic, but his oratory is not in the same league – although, of course, it does not need to be.

Because the people have got to the promised land.
Posted by Tim Fenton at 18:38