Guido Fawked – Another In the Eye

The perpetually thirsty Paul Staines, who styles himself Guido Fawkes, is not a happy bunny, despite supposedly being “#1”. And the source of his unhappiness is, not for the first time, Private Eye magazine. Staines’ rankling envy of Lord Gnome and Master Emmanuel Strobes yesterday boiled over as he ordered teaboy Alex Wickham to denounce the Eye for recycling Fawkes blog content. 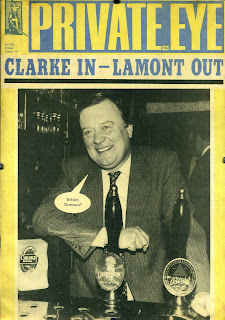 Maybe someone else is getting bitter?

This came on the same day as Wickham recycled an old speech by Adam Afriyie to produce yet more padding (surely “another news item”? – Ed) for the Fawkes rabble, so clearly there is an element of “do as we say, not as we do” at work. But this snark is as utterly predictable as it is tired and pointless: Staines and his gofers are wasting their time, and they have no chance of talking the Eye off its perch.

The predictable part is that the Fawkes blog has been spreading stories telling of the Eye’s imminent demise for years now. Back in 2009, when the deeply subversive Guardian ran a glowing profile of Staines – for which he has kicked them at every opportunity ever since – his pal Matthew “Gromit” Elliott told “He's almost killed off Private Eye. By the time their stories come out, they're out of date”.

This assertion, as with so much that comes out of the so-called Taxpayers’ Alliance, was utter bullshit: the following February, the same Guardian was reporting that the Eye had recorded its best sales figures for 17 years in the latter half of 2009. The following year, the Eye was the best selling current affairs magazine. Then in 2012 came news that the mag had posted its best sales numbers in 25 years.

Why this should be, given the falling circulation of newspapers, was not hard to figure out for those who sought out the Eye’s fiftieth anniversary exhibition at the V&A – I didn’t see Staines or the odious flannelled fool Henry Cole there on my two visits – where the range of features, cartoons, covers, and good old-fashioned investigative journalism from the magazine’s back catalogue were on view.

As editor Ian Hislop noted, during 2011 the Eye majored in stories such as Phonehackgate, PFI and the Hartnett HMRC “tax sweetheart” deals. The Fawkes blog ignored the first until their lame kick at Piers Morgan, and missed the other two. Picking at the Street Of Shame feature – the heading style of which has been shamelessly recycled by the Fawkes blog for “Media Guido” – misses the point.

The Great Guido is not in the same league as Private Eye. Moreover, his attempt to build his brand by dragging someone else down will not work. The Eye does proper news and investigations, it’s better informed and will continue to be so as more and more folks shy away from the Fawkes appetite for spin and dishonesty, the jokes are better and less partisan, the cartoons are funnier, and the covers memorable.

Staines and his rabble are welcome to waste their time, though. Another fine mess.
Posted by Tim Fenton at 13:31