Another hack working in the service of the Murdoch Sun has been arrested this morning: Anthony France enjoys the distinction of being the 22nd from the title to be nicked by the Met’s finest under the auspices of Operation Elveden, “on suspicion of conspiracy to corrupt and suspected conspiracy to cause misconduct in a public office”. Fellow journalists are not happy.

The dissatisfaction at seeing another of Rupe’s downmarket troops having his collar felt has only been heightened at the realisation that France had just written a piece titled “5 cops in hacking case axe ... ‘Disgrace’ rap for the Met” in which he had revealed “FIVE cops and a civilian worker have been axed or forced to resign from Scotland Yard’s probes into phone-hacking and payments to public officials”. 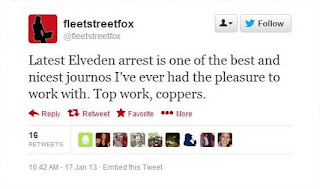 So, in the twisted logic of paranoid hacks, France had shown that the rozzers who were nicking all his mates were themselves bent – thus no doubt meaning nobody did anything wrong, really – and that the arrest was an act of revenge, the sinister silencing of our Great British Free Press (tm). And, if that just happened not to be true, well, Plebgate, so there. 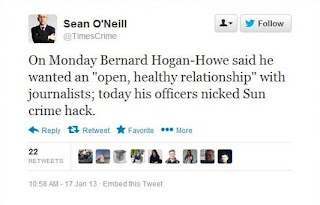 There was, as Captain Blackadder might have observed, only one thing wrong with this: it was bollocks. France was arrested after the period 2004 to 2011 had been investigated. In any case, the idea that a column from just a fortnight ago could have worked its way through the Police’s internal procedures to an arrest this morning is fanciful in the extreme. And Plebgate? Regretfully, this is also a red herring: the Special Operations Police officer who was also arrested this morning does not work in Royalty Protection or Diplomatic Protection. This will not satisfy the more unhinged, some of whom are now grumbling openly about Sun editor Dominic Mohan “failing to protect” his staff, while not saying how this could be achieved. 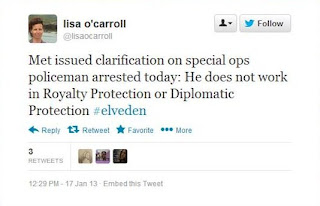 Does he install a crystal ball in his office? Does anyone expect the Met to give him, or anyone else in the Murdoch empire, advance notice of arrests? And even if they did, what would Mohan be able to do, without getting himself charged with obstructing the Police in the execution of their duty (and maybe attempting to pervert the course of justice)?

Guys, it’s a Police investigation. People get arrested during those. It never used to fuss any of you when it was druggies, fraudsters, greenies, lefties and Muslims getting nicked, spending months on bail, and having their lives put on hold, did it? So why on earth do you think hacks are such a special case?

You people are just ordinary citizens like the ones you spend so much time chasing after and making up stories about. Except you’re the ones getting chased. Tough.
Posted by Tim Fenton at 14:37

Only a minor point of order but I believe that News International management *are* given advance notice of arrests (albeit not much) if only to arrange for the arrestee to have prompt access to legal advice etc.

Whether this extends further than the Chief Exec and goes down to the Sun's editor I'm uncertain.