Guido Fawked – Not Striving For Accuracy

One thing that must be remembered about the Guido Fawkes blog is that its authors, the perpetually thirsty Paul Staines and his tame gofer Henry Cole, do not, repeat not, ever look in on Zelo Street. After all, the flannelled fool Cole has decreed that I am no more than a “looney [sic] trainspotter”. So taking any notice of this blog would be unconscionable. It therefore doesn’t happen.

And who in their right mind would need any knowledge of the rail network? Well, it seems that Cole could have used some on Sunday, when he was returning from Edinburgh to London – by train. With a choice of just one station to aim at – Waverley – he managed to turn up at the wrong one, a magnificent feat of stupidity. This cost him a serious amount of money. Good.

So we come to the less than dynamic duo from the Fawkes blog not checking out Zelo Street: this was shown to be false with the ongoing Commons beer row (see HERE). In a post update, I pointed out that saying “the brewery have sent over ‘Kangaroo Court’ as a replacement” was wrong, as this beer came from a different brewer to the controversially titled “Top Totty”.

And it came to pass that the Fawkes blog was edited – totally coincidentally, you understand – to change “the brewery” to the more general “a brewery”. Sadly, this edit was so rushed – a Cole characteristic – that it now read “a brewery have [sic] sent over ...”, which illustrates the generally poor grasp of English that a university education has given the flannelled fool.

Moreover, for those that might think this an isolated incident, a post the previous day about Chris Huhne’s partner Carina Trimingham merely underscored the poor and rushed nature of the Fawkes blog, as it talked of people “having unmitigated access to Parliament”. Perhaps Cole was still ruminating on the previous day’s travel disaster as he made an unlimited fool of himself. Again. 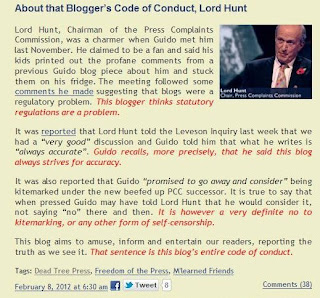 But, so what? Well, Staines has said today – ahead of his appearance at the Leveson Inquiry – that the Fawkes blog “always strives for accuracy”. As I pointed out last month, the level of veracity in what the less than dynamic duo publishes is on occasion zero. Staines’ assertion before a Lords’ committee that he did not single source “career ending” pieces, moreover, was utterly dishonest.

That was how he got the two stories about Chris Huhne’s expenses, both of which led to complaints – designed to end Huhne’s career – and which were both thrown out. Single sourcing – including hearsay – and fabrication are all too often used by the Fawkes blog. The copy is routinely ungrammatical. And the main author is a serially dishonest fraud who merely pretends to be a journalist.

Another fine mess, one more time.

And who on earth is this "Miss Information" character Henry talks about?

This is an excellent blog, but I have to take issue with one of the grammatical criticisms. oxforddictionaries.com and The Queen's English Society agree that collective nouns can be used with either a singular or plural verb. Hence, "brewery have" and "brewery has" are both valid.

Fair play on the rest of it, though.