Return Of The Poison Man

Twitter is not a happy environment for all those who seek to use it to project their message: while some broadcasters, politicians and slebs garner millions of followers and succeed in building up their image in the process, others bring controversy. This latter looks to be the fate of Tory spinmeister and dog whistle specialist Lynton Crosby, who has stumbled onto the medium recently. 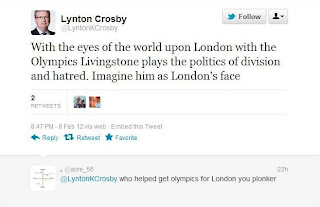 Lynt clearly isn’t too fussed with following anyone: his Twitter feed is no more than a tool for broadcasting propaganda, in the style of Melanie “not just Barking but halfway to Upminster” Phillips. But it is the real dog whistle deal, as he tells “Livingstone plays the politics of division and hatred. Imagine him as London’s face”, the intention being to induce widespread Pavlovian slavering across the capital. 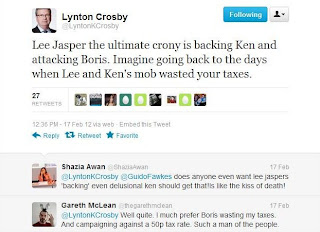 And just to underscore this tactic – despite one fellow Tweeter making adverse comment – comes “Imagine going back to the days when Lee [Jasper] and Ken’s mob wasted your taxes”, which conveniently omits talk of vanity buses, vanity cable cars, and a less than revenue neutral cycle scheme which has caused Barclays’ bosses to laugh all the way to their own particular bank. 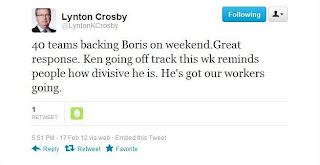 So then we get a change of tack, as Lynt tries to gee up the campaigners: “40 teams backing Boris on weekend. Great response. Ken going off track this wk reminds people how divisive he is. He’s got our workers going”. This makes no sense at all. Professor Unwin? “Deep joy campaigni across the widely capitole. Wonder of the blondy Boris vanqui lefty Livingstole in the forthcomi electilode”. That’s much better.

But no matter, back comes Lynt with his first deadly serious and specific attack: “Maria Eagle in Guardian confirms no money pot for Ken’s transport plans – so fare cut promise is a scam and investment at risk under Ken”. Oh dear. Maria Eagle isn’t in Government – minor point there – and Lynt isn’t up to speed on linking to the piece in the deeply subversive Guardian.

So he has another go an hour later. Sadly, though, Ms Eagle does not say anything about Livingstone’s campaign pledges on transport, and moreover talks of opposing “cuts in Network Rail and would use the cash to keep fares down” (Ken’s majoring on fares). She also talks of “cash for safe cycle lanes”. One would have thought that Lynt would have made sure of his ground before posting that one.

That causes the thought to enter that this Twitter account could be a spoof, but it has the official Tory Tree (tm), it links to the Back Boris 2012 site, and it has the authentic dog whistling one would expect. But unless Lynt can figure out Twitter and stop insulting his target audience, this isn’t going to help Bozza’s campaign one bit.

Which could be very good news indeed for Londoners.