Some parts of the blogosphere, sad to say, are most reluctant to face reality, own up to the error of their ways, or more prosaically to take a hint. Thus it is that we encounter, yet again, the flannelled fool Henry Cole, tame gofer to the perpetually thirsty Paul Staines at the Guido Fawkes blog, who has not, repeat not, been looking in on Zelo Street, because he says so (cue hollow laughter).

Equally sadly, he says a number of other things too, many of which continue to be defamatory of this blog. Here he talks of those who “follow my every move online”, while not telling that it was by following my “every move online” that he discovered I had called him out for an act of terminal stupidity: having a choice of one station to catch your train, going to the wrong one, then getting hit for £130, is not clever.

But this is a mere warm-up for another excursion through Hypocrisy City yesterday, as the Fawkes blog went after Ken Livingstone. As I pointed out, there is nothing untoward about the former Mayor’s tax arrangements: it would be interesting to see how Staines takes any payments from his own limited company. And it was another example of double standards to drag up Press TV. 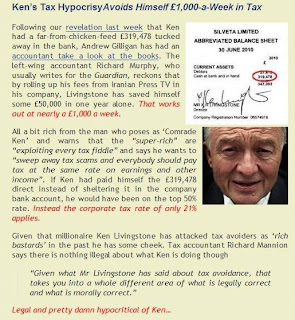 The Iranian backed broadcaster is clearly A Very Bad Thing where Livingstone is concerned, but not to be mentioned when the Fawkes blog depends on one of its beneficiaries – Max Keiser – to back its campaign against Trinity Mirror. Anyway, here’s the first version of yesterday’s story, with the clumsily constructed headline and blatantly untrue attribution to Richard Murphy. 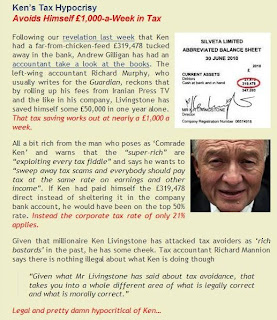 Then, but by sheer coincidence, you understand, and almost as soon as I had posted the update that called out the Fawkes blog, an update was made and the headline revised. A line of text was also changed, but the dishonest attribution to Murphy was not removed. In replying to my comment on this miraculous coincidence, Jackie Neylon was upbraided by the preposterous Cole.

Aware that Cole was incapable of acknowledging a remark that was bang out of order, I apologised for him. He then followed “he’s full of shit” with the characteristically pejorative “loony”. Perhaps he believes this petulant campaign will progress his position, and in this he is correct. His problem is that any progress he makes will be in the wrong direction (that would be backwards).

Henry Cole has, so far, attempted maliciously to smear me in front of the BBC and Guardian, told a demonstrable whopper about my relationship with the Huffington Post UK, and has otherwise ventured beyond the pale. He was told what would happen at the time, and this blog will continue to dump on this wretched and inadequate individual as and when I see fit, whether he likes it or not.

And there is nothing that he can do about it. Another fine mess, once again.