Campaigning for the London mayoral election is well and truly under way. I know this because not only has spinmeister Lynton Crosby stumbled onto Twitter – as I noted the other day – but the movement to re-elect occasional mayor Alexander Boris de Pfeffel Johnson has started recruiting supporters. Moreover, it is maintaining Bozza’s liking for paying folks in “chicken feed”.

And that “chicken feed” certainly isn’t going to be anything like the £250k a year that Bozza at present trousers off the Maily Telegraph. In fact, it isn’t going to be anything at all: the Back Boris 2012 Campaign (tm) is advertising for volunteers. The successful applicants will deal with recruitment, canvassing, and office work, and they will be doing it just for the nice warm feeling of doing it for Boris. 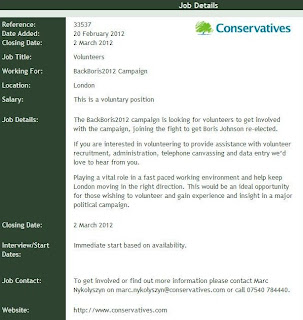 Moreover, the advertising is being carried by taxpayer funded website w4mp, so the Bozza re-election bandwagon gets to sponge off taxpayers of all political persuasions. And on top of that, the adverts carry a whiff of blatant ageism, telling of a “fast paced working environment”, which those of us over 35 know to be code for “old farts shove off ‘cos you’re not welcome”.

Strangely, Lynton Crosby’s Twitter feed does not carry any mention of the advert, or its presence on a taxpayer funded resource. That’s a pity: it would have been most revealing to see the great man spin this one in his client’s favour. After all, there isn’t even a mention of lunch or travel expenses. But there is at least one redeeming feature about this campaign.

And that is that Bozza hasn’t been blatant enough to ask his pal Dave to include it in the current workfare initiative. Yet.