Back in early 2008, the campaign for the presidency of the Edinburgh University Students’ Association (EUSA) was in full swing. One of the candidates urged his rivals to sign a “Clean Campaign Pledge” to show that they had no association with any outside websites. This was an act of breathtaking hypocrisy, as the student concerned was involved with a blog attacking EUSA officials.

Zelo Street regulars will not be surprised to know that the hypocrite was none other than the flannelled fool Henry Cole, now tame gofer to the perpetually thirsty Paul Staines at the Guido Fawkes blog. Cole had denied being involved with the attack blog (called EUSAless (ho ho ho)) until the Journal caught him out. Even then, he chose to dissemble before finally apologising.

Some of the comments made about this blog and Cole’s involvement will not surprise anyone who has had dealings with this singularly unpleasant individual: “he ... said he had nothing to do with it. He was lying to us ... the people that have been involved in this [blog] care more about mud slinging and destroying people ... vile and offensive ... some of the criticism has been unacceptable”. 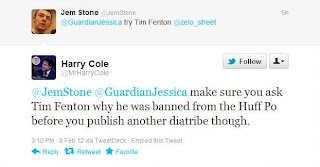 And Cole is still at it, but yesterday he made a big mistake: he openly smeared me in order to discredit me in front of the Guardian and BBC. Jem Stone of the Beeb mentioned me to Jessica Reed of the Guardian. Cole jumped in and warned “make sure you ask Tim Fenton why he was banned from the Huff Po before you publish another diatribe though”, the Tweet being timed 1510 hours yesterday.

This was defamatory, maliciously so, and undoubtedly premeditated. I know this as the HuffPo published a blog post of mine at 1742 hours yesterday, demonstrating that no ban had taken place. The relationship I enjoy with the HuffPo is the same as any of their other 2,000 plus blog contributors across the UK. Cole was making it up, and on this occasion he got caught.

There is always that risk when putting the boot in on the sly, and this is only heightened when the person swinging that boot is a clueless and congenitally stupid buffoon like Cole. Smearing is an art for those who are able to engage brain first, something which is clearly alien to this flannelled fool, this joke of a human being, this stranger to English grammar, this sad and pathetic loser.

I do not expect Cole to apologise for this unnecessary, objectionable and most unwise act. In fact, I expect more of the same, and this will merely confirm his inadequacy. And as to what he can expect, perhaps he should ask his boss what Kelvin McKenzie – Staines’ hero – said to “Shagger” Major after Black Wednesday. Because that is what is now going to happen to Cole.

After all, no civilised individual would want it any other way.

If you had the spare cash - you could probably sue.....