As the snow and ice gradually retreats and temperatures rise, one might think that the Express’ weather shock horror front page splashes – such a lucrative attention-getter, and at next to zero cost – might be on their way out. But that thought has today been shown to be misplaced, as Nathan Rao (busy fellow, our Nathan) has moved on to “Britain Faces Drought Crisis”. 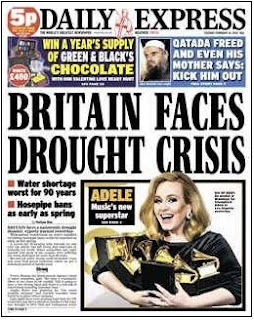 It does? How can that be? It’s not been the driest winter here in the north west, but of course rainfall varies from one region of the UK to another. For the past two summers, while London’s Hyde Park was looking distinctly parched, the grass had no problem growing in North Wales and the Lake District. Rao has figured this out, as he tells “Water Shortage Worst For 90 Years”.

What, worse than 1976? Well, not everywhere: this only applies, and even then only potentially applies, to East Anglia and the South East. And maybe parts of the Midlands, although for some reason Rao manages to miss all those water sources in Wales that provide for this part of the country. Also, the research fails when it comes to 1976 – badly.

There was no widespread deployment of standpipes (none, for instance, in West Yorkshire), as he asserts, and nor was rationing otherwise imposed across significant areas of the UK. The potential was certainly there, but days after Denis Howell was made “minister for drought”, the heavens opened, and soon after he became “minister for floods” instead.

Rao’s geography is also shaky: he talks of “Anglia’s reservoir in Rutland, near Lincoln”, which is a bit like saying “Brighton, near London”. The two are around 50 miles apart. Can’t the Desmond press stretch to a map for the office? Actually, the thought occurred that the answer to that question, given Des’ parsimony, could well be “no”, so the howler is no surprise.

In any case, the lower than average rainfall has been with us for the best part of two years – although mainly in the South and East of England. Like so much that gets splashed by the Express, it isn’t new news, merely reheated stuff given a sprinkling of shock horror and a dramatic looking headline. But it costs no more than a few phone calls to pull together.

And that means yet another front page that gets punters to pick up the Express, but still costs Des very little money. It’s good for the bottom line, and therefore qualifies as yet another Benchmark Of Excellence.