Last August, I noted that Private Eye had turned its attention to the bear pit that is Maily Telegraph blogland, and that the assertion had been made in the piece that contributors were ranked according to the number of hits their posts garnered each month, with the worst performing put on warning. 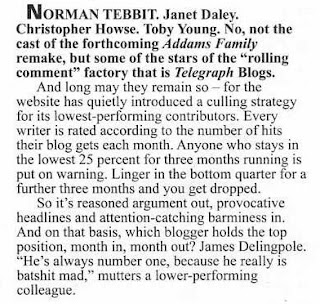 This did not go down at all well with Damian Thompson, editor of Telegraph blogs, who took issue with, well, the whole article. However, as the Eye would put it, no correspondence was forthcoming from m’Learned Friend, nor from the offices of Messrs Sue, Grabbit and Runne.

The reason for this has just become clear: ranking contributors was exactly what was being done, and Thompson was the one doing it, although the practice has recently been abandoned. We know this because of an uncharacteristic bout of candour from one of those contributors.

Step forward the loathsome Toby Young, who has announced his departure from providing nourishment to those drifting around the comments sewer of Telegraph blogs, as he has taken up the Murdoch shilling, and joined Rupe’s downmarket troops as a pundit for the Super Soaraway Sunday Steamer.

In his valedictory post, Tobes tells of being a Telegraph blogger “The prospect was a little daunting, not helped by the fact that, at the end of each week, Damian would email all the other bloggers with a kind of league table, ranking us according to how many hits our posts had got in the past seven days”.

He goes on to say “I soon learned one of the perennial facts about Telegraph Blogs: no matter how prolific or fascinating you are, you will never be as popular as James Delingpole. He always comes first”, which was what the Eye had said. The difference, of course, is that Tobes omits any judgment on Del Boy.

So perhaps it was someone else who told the Eye “He’s always number one, because he really is batshit mad”. There are, for Toby Young and his now former colleagues, limits to the outpouring of candour.