Express Gets One In The Eye

Not content with their four weather shock horror front page splashes in five days last week, the hard-pressed hacks labouring in the service of Richard “Dirty” Desmond at the Express have returned to this zero cost variant of Phil Space journalism, this week managing three out of four front pages so far. With two weekday editions still to come, it’s possible that last week’s record could be broken. 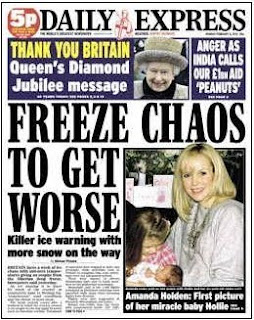 Monday brought “Freeze Chaos To Get Worse”, the only surprise being that the name on the by-line was other than Nathan Rao. Perhaps he was being allowed a day off. 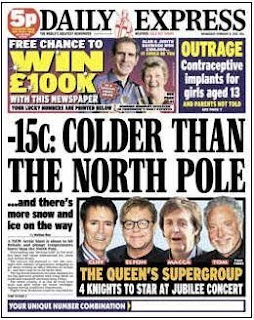 Yesterday, though, Rao came roaring back with “-15C: Colder Than The North Pole” (it wasn’t). There was “more snow and ice on the way”. Not where I live, there wasn’t. 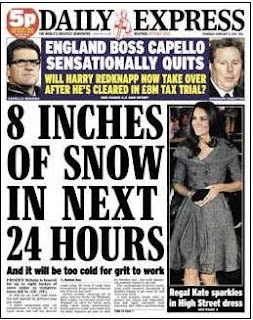 And he reprised the theme today, with “8 Inches Of Snow In Next 24 Hours” (so far in my part of the world we’ve had none, but it has rained). So his sub-heading “it will be too cold for grit to work” doesn’t apply, well, not here. 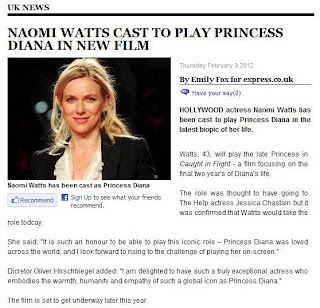 Was there nothing else in the Express locker for the readers? Ah well. There’s always a Diana story, isn’t there? Certainly is: “Naomi Watts Cast To Play Princess Diana In New Film” announced Emily Fox today. Now, if only the weather stories and the Diana ones could somehow be brought together – oh wait, they have! 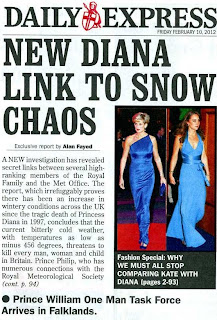 Yes, it can be exclusively revealed that tomorrow’s Express front page is splashing “New Diana Link To Snow Chaos”. There it is, in large and bold capitals. Oh all right then, it’s a Private Eye send-up.