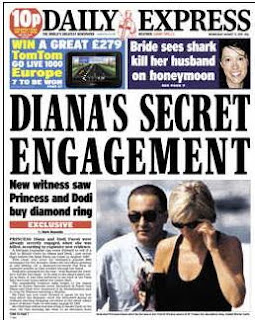 It was not for nothing that Private Eye routinely referred to the recently retired editor of the Daily Express as Peter “mentally” Hill: on his watch, the paper became obsessed with Diana conspiracies, Maddy conspiracies, EU conspiracies, immigration conspiracies, and Muslim conspiracies. He then had sufficient brass neck to say “some redtop editors have lost the plot”.

Having left the building just a year ago, Hill has been let back in to contribute an opinion column for Des’ increasingly cheap and nasty version of the title that, under the leadership of Max Beaverbrook, was once shifting four million copies a day, along with some feared and respected investigative journalism. Now it is reduced to churning press releases and recycling copy from its rivals.

But Hill still has his finger on the pulse, as witness his latest piece “Qatada Has To Go”. Here, he tells of “the lavish attention being paid to the rights of Muslim [check!] extremist [check!] Abu Qatada”, who is being paid “generous benefits” [check!]. Hell’s teeth, he’s banged up for 22 hours a day Pete – how exactly do you expect him to find gainful employment when he can’t even talk to his pals?

But Hill is right about the “lavish attention”. Just look at the froth that his fellow pundit Leo McKinstry has worked up as he splutters “This Human Rights Fiasco Needs To Be Brought To An End”. Readers get “judicial destruction ... illegal immigrant ... Muslim extremist ... perverse ruling ... huge outcry ... enfeebled excuse-making ... political cowardice ... alien continental law”. Pretty damn lavish.

And there’s another ranting pundit following close behind: Frederick Forsyth is clearly incandescent with rage as he thunders “We Are Governed By Mice, Not Men”. Yes, Qatada is “freshly released ... on the taxpayer”, and is claimed to have £170,000 available to him. Really? Not really, Fred is merely “presuming” that he has, because otherwise it doesn’t fit in with the rest of the rant.

So just three pundits giving Qatada “lavish attention”, then? Well, no, there’s yet another: step forward Nick Ferrari to tell readers “Abu Qatada Has No Rights”. Sadly, though, Nick isn’t paying attention, telling that Qatada is “convicted”. Not in this country he ain’t, and what the gallery of Express blowhards isn’t telling its readership is that we don’t have an extradition treaty with Jordan, where he has been convicted.

But Nick is sure he’s right, because he had a former minister on his shamelessly plugged breakfast show. So who is this upstanding citizen? Ah well. Actually, it’s none other than “Shagger” Mellor, famous for telling Antonia da Sancha – while wearing his Chelsea shirt – that he was “absolutely knackered”. And then for generating the headline “from toe job to no job”. And then losing his seat.

Hill is right about the “lavish attention”. Pity about the rabble paying it, mind.