Slater’s Brewery – located in an industrial unit on the outskirts of Stafford – is yet another of those small scale brewers specialising in real ales. In a marketplace where it is commonplace to give beers (how shall I put this?) distinctive names, someone at Slater’s had a subtlety bypass operation when it came to their 4.0% ABV blonde ale and gave it the name Top Totty.

And just to make sure nobody got the, er, right impression, a cartoon figure of a bikini-clad young woman with Playboy bunny ears was used. So far, so 1970s, but then the beer has featured at the Strangers’ Bar at the House Of Commons. Shadow equalities minister Kate Green objected to what she called a “demeaning” portrayal of women, and the beer was withdrawn.

There was a predictable reaction from the laddist tendency: James “saviour of Western civilisation” Delingpole was typically snarky, and at the Guido Fawkes blog, the flannelled fool Henry Cole, having to hold the fort alone in the absence of his perpetually thirsty boss, had to resort to a UKIP MEP (not sitting in the Commons, then) for comment.

But among Westminster women, there was a telling cross-party consensus: Speaker’s wife Sally Bercow, a Labour supporter, Tweeted “Cannot believe that there’s a beer called ‘Top Totty’ on sale in the Commons! Outrageous – does Mr B know?”, and it wasn’t just fellow Labourites who were queuing up to pass adverse comment on the choice of ale.

Because, in another move that disappointed some on the right, Tory MP Louise Mensch, who has already caused significant offence by not only reading, but approving of, the deeply subversive Guardian, put the appalling Cole in his place by telling him “the picture is offensive. ‘Totty’ is offensive when used to describe a woman. Reduces her to just sexuality”. 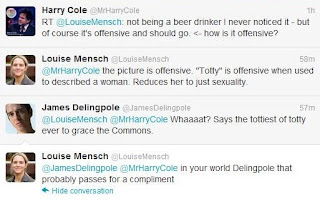 Moreover, when antediluvian sneer merchant Delingpole came back at her with “What? Says the tottiest of totty ever to grace the Commons”, Ms Mensch executed an excellent put-down by replying “in your world Delingpole that probably passes for a compliment”. Arnie says Don’t Mess With Louise.

Kudos to Sally Bercow and Louise Mensch: whether it encourages Cole, Delingpole and the rest of the ladderati to grow up, only time will tell. And as for Slater’s – they won’t be fussed. Anything they can brew will be sold out for months ahead. No publicity is bad, and all that.

[UPDATE1 1845 hours: just to show that Sally Bercow and Louise Mensch were on the right side, there has been an intervention from (yes, it's her again) Tory MP for Mid Bedfordshire Nadine Dorries, who has Tweeted "Westminster = sense of humour free zone ... weak PC decision".

The fragrant Nadine also called the ban "absurd". Maybe she should take the matter up with her colleague who represents Corby?]

[UPDATE2 3 February: Mail hack Kirsty Walker has weighed in with a piece titled "Female Labour MPs need to lighten up", so she missed Ms Mensch. She talks of beers that have "quirky or unusual names" and includes in that list Bishop's Finger, brewed by Shepherd Neame of Faversham (deep in hop country), but there is nothing odd about the name - it comes from a pub on West Smithfield which is still going strong today.

Moreover, Ms Walker skates over the inconvenient fact that it was Leader of the Commons George Young (nothing to do with the Labour Party) who called for "appropriate action" to be taken - after which Top Totty was withdrawn from sale - and infers that the beer had been on sale in the Strangers' Bar since 2007. It had then been, and was recently, a guest beer only. Pesky detail, eh, Daily Mail hacks? Who needs it?]

[UPDATE3 7 February: much amusement has been caused at the replacement of Top Totty with a similar blonde beer called Kangaroo Court. This has been so difficult for the flannelled fool Henry Cole to report that he has told that this brew was "sent over" by "the brewery" as "a replacement".

This would have been difficult, as the technique known as "five minutes' Googling" reveals: whoever "sent over" the beer, it wasn't "the brewery" (singular). Kangaroo Court is brewed by Blackwater Brewery of Stourbridge, and marketed through Salopian Brewery near Shrewsbury, while Top Totty comes from Slater's of Stafford. More likely the new beer, which is a "Special" for January 2012, just happened to be on hand at the wholesaler.

Still, what the heck, it's all Oop North, and won't matter to poncey southern Guinness drinkers]

Again you are being wilfully blind to facts that get in the way of your man crush on Harry.

What about the quote from the feminist group Women On?

No research. No result.

I'll have to advertise the comments on Twitter - this one is magnificently deluded and narcissistic!

Presumably Cole was dissapointed his boss didnt get a chance to sample the odd pint or 20?

I do love the way men, like our dear host Tim, pretend that they're totally right on and never talk about birds and tits. Tim, I don't believe you're as PC as you say you are, just like I know that the trade union movement, and politics in general is a male dominated penis waving contest, accept when a leftie woman is in the room in which case we're all feminists...natch!

Good to see you got to Edinburgh OK, Hen.

The word you're looking for is "except". And your punctuation is still crap, like 99% of what you spout, which is excellent news, as it means more material for folks like me.

Have a good time at the rugby, and try not to get too Elephants.