There are front page stories other than the EU, Diana, severe weather, Maddie, Benefits, Immigrants and Muslims that are beloved of the Express, and many of them are to do with tax and pensions. If this subject area can be connected to the EU, Immigrants and Muslims, that’s a bonus, but the main thing is that the readers have to be very, very afraid about it. 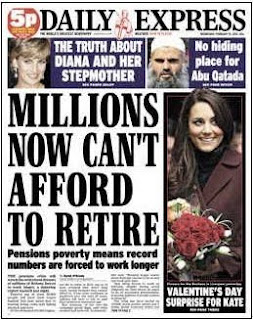 And many of those readers are older people, so Des’ finest concentrate on retirement worries, hence “Millions Now Can’t Afford To Retire” last Thursday (mostly churned from a press release). But then, the story changes in the space of two days to sweep all those worries away, as Saturday brought “Millions Could Get New Tax Bonus” (recycled from a Centre for Social Justice “report”). 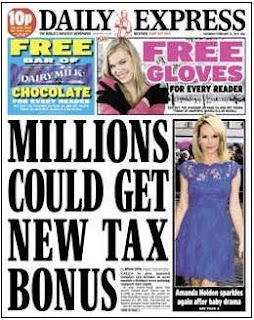 But normal scare service was resumed this morning – no surprise, given the press release from which the story was churned was from the same people as the Thursday one – as the dire news “New Tax Raid On Pensions” was announced. At this point, seasoned Express watchers may have done a double take, because this headline, or something like it, is not a new one. 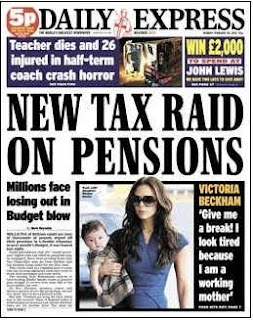 Back in April 2009, there was a “Pension Tax Shock”, and talk of a “new Government tax raid”, based on, er, an alleged hint by Pa Broon which nobody at the meeting concerned actually heard. And there you were thinking that the former PM couldn’t do subtle. But then Labour lost the General Election and the hacks went off to kick the EU. And Immigrants. And Muslims.

But, never willing to let a good frightener go to waste, the subject was back on the front page last summer. “Millions Hit By Pension Gamble” screamed the headline, as the Express learnt the shock news that many funds invest on the stock market. Nothing gets past Des and his hacks. And by November came “£500 Million Pensions Tax Threat”, with the revelation that it was all the Lib Dems’ fault.

Or perhaps it was the Treasury: later that month came “Pension Tax Raid” as it was “revealed” that tax reliefs were to be changed. But they weren’t. This, though, did not deter the hacks who returned to the subject the next month (maybe the stream of severe weather headlines stopped after Nathan Rao had a day off). “£47,000 Raid On Your Pension” came the headline. This time it was the judges to blame.

But then came a hitting of the sweet spot rare even in Express land: only last week the real culprits were unmasked: “Huge Threat To Jobs In EU Pension Shake Up” came the message. It was the EU all along, but then, the average Express reader knew that already. And the story, yet again, was churned from a press release.

All those scare stories, mainly from press releases, so hacks can be kept at their desks and kept productive. That’ll be another Benchmark Of Excellence.