What with all the weather shock horror front page splashes recently, the Express has not run an EU frightener for some time. And, as the paper is running an alleged “crusade” against the EU, there needs to be a regular supply of EU frighteners. So today, with the weather not bringing death and destruction in its wake, came “Greedy Euro MPs Demand Pay Rise”. 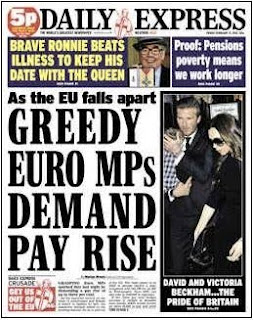 And not only that, the demand was being made “as the EU falls apart”. It’s falling apart? Heck, I must have blinked and missed it. Martyn Brown’s rant cranks up the frothing to the max: “Grasping Euro MPs ... fury last night [it’s always “last night”] ... brink of catastrophe ... shameless demand ... rake in £360,000 in expenses ... hugely inflated ... staggering ... juggernaut ... gravy train”.

Sadly, one of those they turn to for a comment is Nigel “Thirsty” Farage, who knows all about raking in expenses – a reputed £2 million of them so far. But there was also a contribution from Matthew “Gromit” Elliott of the so-called Taxpayers’ Alliance (expenses not disclosed) to press the required buttons: “rife with waste ... hoover up cash ... pointless spending ... affront”. Sir Sean says I think we got the point.

OK, so what is actually happening? Well, it depends on who is setting the scene: a report from RTT news (they’re in Williamsville, NY) on the same subject carries the headline “European Parliament’s 2013 Budget Frozen For Expenditure Cut”. There will be a real terms freeze, along with an attempt to find further savings, particularly where there may be overlaps across budgets.

And what’s this? “All the individual allowances for MEPs will be frozen until the end of this parliament’s term. All travel-related budget lines ... will be frozen at 2012 levels. The overall travel budget has already been cut by five percent for 2012”. There’s more: “MEPs also adopted an amendment ... ‘the real and biggest saving could be made by having a single seat for the European Parliament’”.

The Express, though, just parrots the usual “astronomical amount ... gold plated pensions ... and other costs involved in a Parliament that meets in both Brussels and Strasbourg”, thus missing the very significant news that there is a move in train to end the practice of having two locations for the EP. Seeing that through would produce real savings and show that MEPs were serious about saving money.

In reality, of course, the Express will spin whatever comes out of the EU to make it fit the agenda. Actually informing the readers does not enter: that would not frighten them sufficiently to get them to pick up the paper from the news stand. Today’s front page will do just that. And it won’t have cost more than a few phone calls.

And we know what that means. Yes, it’s another Benchmark Of Excellence.