There was joy in the right leaning part of the blogosphere recently when the scary looking Mark Wallace, after trawling around Facebook in search of wrongdoing – stamp collecting and spotting various kinds of transportation devices is clearly so last century – found a Labour councillor “liking” something IRA related, and then saw said councillor suspended by the party as a result. 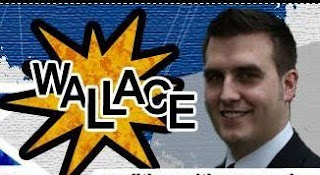 This sparked off a round of righteous bluster by those of like mind: comments by the general secretary of the Durham Miners’ Association that there was little sympathy in parts of the north east towards Margaret Thatcher caused flannelled fool Henry Cole, tame gofer to the perpetually thirsty Paul Staines at the Guido Fawkes blog, to engage full righteous victimhood mode.

So it might be thought that some kinds of comments directed at political opponents should be considered beyond the pale, off limits, and the subject of disciplinary action. But that thought may be premature. Wallace, as well as supposedly working full time for Portland Communications, is also retained as a “Senior Fellow” by the so-called Taxpayers’ Alliance (TPA), one of whose area reps has recent form here. 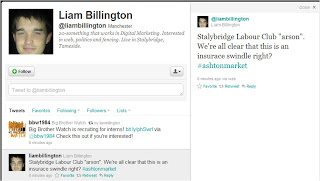 Last September, TPA Manchester rep Liam Billington, observing the aftermath of an apparent arson attack on the Labour Club at Stalybridge, Tweeted “Stalybridge Labour Club ‘arson’: we’re all clear that this is an insurance swindle right?” and the Tweet was only deleted after I pointed it out to TPA director Matthew Sinclair. This was not about former Prime Ministers, but folks in the local community.

And one of those folks had suffered significant burns in the arson attack. But there was no suspension: Billington, as far as is known, is still TPA rep for the area – just the one, you understand, showing the depth of those fabled “grassroots” – and moreover there was no apology to the Stalybridge Labour Club, just an exercise in keeping heads down and hoping nobody would notice.

The only subsequent action has been that Billington has – perhaps wisely – taken his Twitter feed private, thus demonstrating the TPA’s commitment to transparency and openness – which as any fule kno, is for them to demand of others while managing not to practice themselves. One thing is for sure: “Senior Fellow” Wallace won’t be talking about this any time soon.

Can you smell hypocrisy?

[UPDATE 22 February: also on the trawl through the activities of Labour councillors are Paul Staines and the flannelled fool Henry Cole. The less than dynamic duo has gone after a member of Tameside Council - the area which also covers Stalybridge, and its Labour Club. This is after a less than cordial reference to Margaret Thatcher.

Strangely, the Laurel and Hardy of the blogosphere have failed to mention their pals at the so-called Taxpayers' Alliance and the behaviour of their man in the area Liam Billington (see above). It's probably an accidental oversight: they wouldn't be a pair of selective and clueless tribalists, now would they? Another fine mess]