King Of The Keiser

During his testimony to the Leveson Inquiry this week, the perpetually thirsty Paul Staines, who styles himself Guido Fawkes, attacked Tina Weaver, editor of the Sunday Mirror – who also sits on the Press Complaints Commission (PCC) – for being involved in phone hacking. Staines told that he had been given this information by two journalists.

At this point my bullshit detector went off: previously the Fawkes blog had attacked Ms Weaver on the basis of a Tweet from Russia Today (RT) host Max Keiser, who had only the other day repeated his assertion. Keiser, who also appears regularly on Iranian broadcaster Press TV, claimed that Ms Weaver had “told me personally she and Piers Morgan were aware of phone hacking”.

Perhaps Tina Weaver has met Max Keiser. More likely she hasn’t, and this is just another example of the Keiser appetite for what I call the drive-by e-shooting. This can be explained by looking at a few more of Keiser’s creative excursions into the Twittersphere, starting with this magnificently fraudulent one from today, “British forces enter Syria to aid American special forces”.

Right. And this steaming pile of bovine by-product came from where? The Voice Of Russia is reporting this “news”, which in turn came from the neo-conservative Israeli alarmist website Debka.com. Max is earning his nickname of Dubius Maximus here. But you should take him seriously. He doesn’t like not being taken seriously.

Late yesterday he complained “No Israeli/US/UK hawks will come on my show. PUSSIES! Your wife and kids wish secretly that you just top yourselves”. Looks like those hawks saw him coming and booked a collective hair appointment. 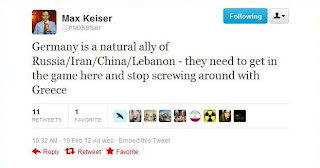 Yet more bizarrely, Keiser has today Tweeted “Germany is a natural ally of Russia/Iran/China/Lebanon”. Did he really mean that? 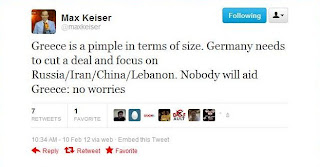 Two minutes later came the confirmation that he really did: “Germany needs to cut a deal and focus on Russia/Iran/China/Lebanon”.

And if that isn’t far enough into Wibble territory, a few minutes later came “W. Blackpool (aka N. Ireland) should volunteer to pay Anglo-Irish debts just to be neighborly”.

Somewhere out there, a barking noise can be heard. It could be a dog. Or maybe it’s Max Keiser. This bloke is seriously away with the fairies, and why Paul Staines (or anyone else) places any trust in his ramblings is one of life’s continuing mysteries. Perhaps the Great Guido could enlighten everyone?

Most likely it’s because it’s what he wants to hear. Another fine mess, once again.

[UPDATE 12 February: the Fawkes blog cited Keiser in a post dated 15 July last, although for some reason Max's creative retelling was not mentioned. He was given another name check eight days later. At no time were readers of that blog told that Keiser was prone to post exaggerated, purely provocative and downright untrue items on Twitter (see above).

I'm sure this is a mere oversight, and that the Fawkes blog will reconsider the veracity of this witness and inform its readership accordingly. Or maybe not]

Interesting fellow, to put it one way, though I doubt he'd be someone I'd even trust to tell me the date. What does "natural ally" mean anyways?