Dick And The Rozzers

Comedy gold of the unintentional kind comes to the Mail today as obscenely overpaid and otherwise tedious and unfunny hack Richard Littlejohn attempts to ride to the rescue of his former colleagues at the Super Soaraway Currant Bun. “Scotland Yard Stasi and this sinister assault on a free Press” howls the headline, as Dick launches into the rozzers for, er, doing their job.

And he slips a porkie into the first sentence: “Squads of up to 20 police officers ...” he begins. The Met has confirmed that “no more than ten MPS officers” attended each address. Then comes “six o’clock in the morning” and “dozens more detectives rip out car doors, tear up floorboards and search through underwear drawers and beneath mattresses”, all of which he just made up.

Dick’s creative retelling is then underscored with “Nazi Germany ... Communist East Berlin under the Stasi” and the clinching “Gestapo tactics”. It gets better in short order as Littlejohn sternly tells “No one is condoning criminality”, although you know that just around the corner is “But”. Following the “But” is “they are being treated worse than terrorist suspects” (how?) and Abu Qatada. 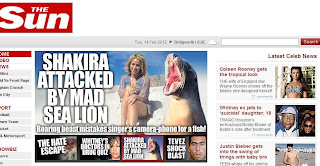 Whatever. Dick knows who is to blame for his pals getting the heavy treatment from the rozzers. It’s Bernard Hogan Howe, newly appointed Commissioner of the Met. Giving him the job was clearly A Bad Thing, because it should have gone to Hugh Orde – after all, Dick says he was “the outstanding candidate”. He wasn’t saying that last August when he was pushing for Bill Bratton to get the job. Hypocrite.

But Littlejohn has the inside track here: “My colleagues on the crime beat say that since Hyphen-Howe (laugh? I thought I’d never start) was installed as Commissioner ahead of the outstanding candidate Sir Hugh Orde, normal relations between the police and the press have ground to a halt”. As if you get your “colleagues on the crime beat” looking in on your gated Florida compound. Making it up again.

Equally made up is the inference that Theresa May – someone Dick dislikes to the extent of going into sneering, patronising sexist mode whenever he talks about her – should have questions to answer. The only ones protesting are Sun hacks, and their pals. As I pointed out yesterday, those same folks had no problem when the boot was on the other foot and it was the hacks’ targets getting nicked.

Dick, you’re a dick. Don’t get paranoid. Get real.

"Normal relations between police and press have ground to a halt" so they aren't getting paid anymore? is that what he's saying? perhaps he needs interviewing too.