Internships are a much debated topic around the Westminster village, not least because many of them are unpaid, although some lucky souls get lunch and travel expenses reimbursed. And hot on the employers who are getting away with this are the perpetually thirsty Paul Staines and his tame gofer, the flannelled fool Henry Cole, at the Guido Fawkes blog.

Indeed, the less than dynamic duo have posted several times on the subject: last April, it was the Lib Dem HQ at Cowley Street getting the flak, by October the target was Tory MP Daniel Kawczynski, in December it was the Tories again (“Tories recruit hundreds of interns for free”), and most recently Tone got it in the neck. A true cross-party rogues’ gallery was unmasked.

So it must be assumed that Staines and Cole have judged this practice to be A Very Bad Thing Indeed. And they are also hot on anyone caught sponging off the taxpayer, as shown by their campaign to bring the subsidy of Parliamentary wining and dining to a wider audience, which they have even managed to get into the hated and deeply subversive Guardian. 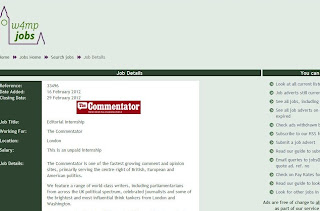 It was therefore something of a surprise to see an advert placed yesterday on a taxpayer funded website for an unpaid internship connected to the Fawkes blog. As can be seen, this was for The Commentator, a newly formed repository of right-wing frothing, ranting and victimhood, whose “UK Political Editor”, as proclaimed on his Twitter bio, is none other than Henry Cole.

Moreover, this is not just an unpaid internship, but on the face of it one without any reimbursement for travel or food. This is a truly exploitative exercise. It would be interesting to hear the excuses for the exploitation, and of course the routine act of sponging off the taxpayer, or as Cole’s pals at the so-called Taxpayers’ Alliance would put it, “the hard pressed ordinary taxpayer”.

Clearly there is one rule for the targets of the Fawkes blog, and another for its authors. And Staines should desist from pretending he’s racked by poverty: he’s got as many houses as Polly Toynbee, who he likes to paint as a “millionaire”. Fact of the matter is that he and Cole, the Laurel and Hardy of the blogosphere, are a pair of stinking hypocrites, and they just got caught.