Telegraph Turns Out The Lights

When the Maily Telegraph published expense details for MPs including many leading Tories, and caused some minor tremors to shake the Coalition as they went after David Laws and Vince Cable, there were some on the right who questioned whether the paper was still the reliable soulmate of fond memory. They need not have worried, as the Workfare episode has shown. 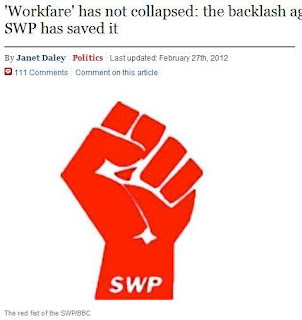 Moreover, the sheer desperation of the Telegraph’s attempts to smear anyone and everyone reporting the matter in a way that is other than to their total satisfaction has merely underscored how far this once great paper of record has fallen under the less than benign stewardship of David and Frederick Barclay (aka The Fabulous Bingo Brothers).

Following Janet Daley’s sounding of the retaliatory charge at the weekend, the hacks and pundits have rallied strongly, with occasional London Mayor and regular collector of the Telegraph’s generous “chicken feed” allowance Alexander Boris de Pfeffel Johnson railing yesterday at the “loony left”, and by the happiest of coincidences being totally in tune with his own party.

This was the cue for the anonymous “Telegraph View” to build on Bozza’s scattergun pounding of the opposition by setting out the approved Tory view, that “A retreat on workfare would fail our young”. This was reinforced by telling that the apparent retreat by many High Street names had been nothing of the sort. Thus readers would be reassured, though later use of the phrase “in truth” should raise suspicions.

Then came supposedly thoughtful pundit Matthew d’Ancona, falling at the first hurdle as he talked of young people going to work in a supermarket “for a month’s learning”, while not telling that this experience, for those stacking shelves, enjoys distinctly limited horizons. He then attempted to sound a rallying cry to firms who have backed away from the scheme not to be “scared of Tweets”.

Thus far, though, the copy had some kind of sense and reason to its talking points, although these were unequivocally in support of the Government. But then came the return of Janet Daley, with a piece that any credible editor would have spiked without hesitation. “‘Workfare’ has not collapsed: the backlash against the SWP has saved it” she announced, and then went completely gaga in short order.

Criticism of the Government was “the SWP’s wrecking campaign”, companies hadn’t really pulled out of the scheme – which was being “loudly bad-mouthed by the Guardian and Newsnight” – and there was an “SWP/Guardian/BBC troika” at work. Just in case readers didn’t get that, an SWP logo was captioned “The red fist of the SWP/BBC”, as the barrel was well and truly scraped.

Will the last journalist leaving this former paper of record please turn out the lights?

That was the first true laugh I've had since this whole stinking affair hit the public eye so thanks for that as I needed it - 12 Trotski Twitters brought Workfare to it's knees... yeah right! They do not like it up them! Just how *desperate* are this fishy mob of Government bods?!?

You've forgotten the smearing of, er, just about everyone as 'job snobs'. The debate is wholly dishonest and we need to move on. More here: http://t.co/AURYpjdl