A Boon Time For Candour

The so-called Taxpayers’ Alliance (TPA), another of those Astroturf lobby groups that declines to say who pays the bills, proudly proclaims itself to be “non-partisan”, a label which is pure bullshit. Its former staffer Susie Squire protested loudly that the TPA were not Conservatives when asked by LBC’s Nick Ferrari. But the appearance on Question Time by current TPA person Emma Boon set the mask slipping.

My contention has always been that the TPA is a right-wing group, and that its sole objective is the demonisation of Government – any Government – along with public service and public works. So it goes after central Government, local Government, anything to do with the EU, Trade Unions, projects like HS2, foreign aid, the minimum wage, the benefits system, and state bodies like the Royal Mail.

And it has a regular slot on ConservativeHome. So, on the basis that something that looks like a duck, sounds like a duck and waddles like a duck is highly likely to be a duck, the only conclusion one can reach about the TPA is that it is a Conservative group with right-wing ideals and that it is about attacking Government. That means it cannot justify the term “non-partisan”.

Sometimes, when you need to prove the point, the opposition comes to your rescue, and following Ms Boon’s appearance last night it has come galloping, in the shape of the perpetually thirsty Paul Staines and his tame gofer, the flannelled fool Henry Cole, at the Guido Fawkes blog, the Laurel and Hardy of the blogosphere. This less than dynamic duo has confirmed my assertions in spades.

Firstly, Cole asserted “They’re anti-government”, thus for once agreeing with me unequivocally. Then his boss, showing the qualities that have made him so instantly dislikeable, Tweeted “There’ll be much bedwetting by lefties tonight”, confirming that the TPA is a right-wing organisation. That means it certainly is partisan. And there was further confirmation that it does not care much about factual accuracy.

That most Tory of Tory MPs – yes, it’s her again – Nadine Dorries was not happy with Ms Boon, Tweeting that she “doesn’t know her facts ... and is playing to the audience for cheap claps”. An intervention from shabby and obnoxious TPA acolyte Andrew Allison, suggesting that his colleague was “speaking for ordinary people” cut no ice with the woman from Mid Bedfordshire. 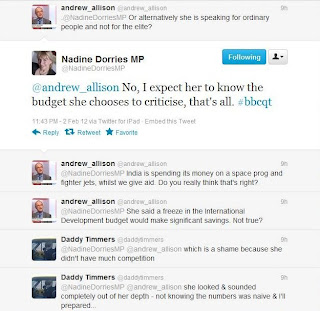 And Allison’s suggestion that Ms Boon spoke “not for the elite” was laughable. As any fule kno, the TPA is bankrolled by the overmonied, greedy and cowardly. It is funded by the elite in the belief that this will enable them to keep hold of yet more of their piles of money. The TPA may not chime with the Tory Party all the time, but it is right-wing. And it is about the demonisation of Government.

My thanks to the opposition for riding so enthusiastically to the rescue.

I think there's a fair argument that the TPA isn't Tory - because the Tory party isn't right-wing enough for the TPA.